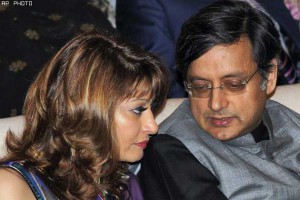 NEW DELHI: Sunanda Pushkar’s husband and Congress MP Shashi Tharoor will be questioned on Thursday again in connection with her murder, police said on Wednesday. Sunanda Pushkar’s son Shiv Menon was questioned by the Special Investigation Team (SIT) at the Vasant Vihar office for around eight hours on February 05.
Saying that the “witnesses who were at home or were present at the hotel, there are few clarifications which need to be obtained from them too”, Delhi Police Commissioner BS Bassi​ said Tharoor’s domestic help Narayan Singh will be grilled once again today.
“The witnesses who have been examined so far, we are analysing their statements and few other witnesses will be examined today. Tomorrow, Tharoor will be quizzed again because we need clarification on certain points from him,” Bassi told reporters.”There are many things emerging from the analysis of the statements so far but we will be able to reach a conclusion only after the investigation is over,” he added.
Tharoor was questioned for around three-and-a-half hours on January 19. Police officials had then refused to share Congress MP’s replies during the questioning, saying any revelation would hamper the investigation.Former Samajwadi Party leader Amar Singh, two journalists – Nalini Singh and Rahul Kanwal – have already deposed before SIT in connection with the case.
Sunanda Pushkar was found dead in a luxury hotel room on January 17, 2014. A murder case was registered against unknown people on January 01, 2015.