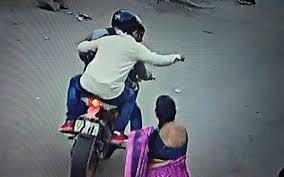 NEW DELHI : In view of the increasing crime in Delhi, the Delhi Police PCR posted in the streets of the national capital have been given a free hand to catch criminals.
Delhi has became the crime capital and criminals have become fearless. After committing a crime if they find police in pursuit they even fire gun shots at them.
To check the sudden spurt in street crime cases in the capital, the Delhi Police it seems have decided not to hesitate while opening fire on criminals in case they are challenged.

Several encounters recently by various units of Delhi Police have left the criminals with bullet injuries in their legs. The message seems clear that if the criminals dare open fire at cops, they would get the answer in the same coin. The sudden rise in cases like robbery and snatching has also led the specialised units to get tough on active criminals in the national capital.
On June 23, in an encounter with police near Pushta road, Geeta Colony, a criminal wanted in a MCOCA case identified as Rashid was shot below the right knee in the exchange of fire.

“To curb street crime, a team of special staff in Shahdara was in the area for patrolling. It was during patrolling that our team got information that a criminal wanted in MCOCA case would be going to Ghaziabad, UP. When he was asked to stop, the accused opened fire. In the retaliatory fire the accused received a bullet injury on his leg,” said Amit Sharma, DCP-Shahdara.

In another encounter on June 25, the police in an exchange of fire at Seemapuri shot a criminal on his left leg. He was wanted in many cases of snatching and robbery. In yet another encounter, two criminals sustained bullet injuries on their legs after they tried to challenge the cops with pistols.
A special force of the Delhi Police has been operating without any borders and is not affilitaed to any police area jurisdiction. They have been catching criminals and displaying a lot of courage.
Now, when any crime is reported from the streets of the national capital, the PCR reaches the spot, pursues the culprit and sometimes takes the victim along to catch the accused.

Since, January 1 to June 28 2020, the PCR has arrested 27 robbers, 39 snatchers, 43 car thieves, 6 thieves, 53 liquor smugglers and 131 other criminals. The PCR managed to recover a total of 417 stolen vehicles. They also recovered as many as 10 knives, 8 pistols and 17 cartridges from the arrested culprits.
In India’s fight against the coronavirus, the PCR also played a pivotal role to help people in distress during the lockdown.The PCR staff took a total of 1235 people to the hospital, including 983 women who experencing labour pains, some burnt victims, injured people, poeple who had drowned.
During this time there were as many as 97 people who were separated from their loved ones, PCR helped them unite with their family.Whether it is the scorching heat or bone chilling cold, the PCR staff carries out its duty to the best of their abilities.
Up to May 31, 596 cases of robbery have been recorded this year in comparison to 964 cases last year during the same period. Upto May 31, 2020, the statistics show that 2,141 cases of snatching were reported as compared to 2,811 cases last year.
Only 2 cases of dacoity this year till May 31 have been recorded in comparison to eight cases last year. Earlier, Lieutenant Governor Anil Baijal directed senior police officers to keep a vigil on street crime, while reviewing the law and order situation in the capital.
(Zeenews with IANS Inputs ).