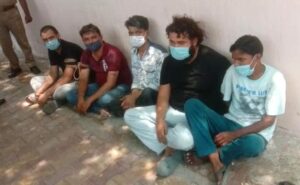 AGRA: To avoid suspicion, a man’s kidnappers in Agra cremated him as a Covid-19 patient after killing him, police said on Monday. Five people have been arrested in the case. The victim Sachin, 24, the son of a a businessman in Agra had left his home with his friends on the evening of June 21. When he did not return till late in the night, his family members called him. His friend received the call and informed that Sachin had drunk too much alcohol and was unconscious.
According to the police, Sachin Chauhan, who went missing on June 21, was kidnapped and murdered on the same day. Sachin Chauhan’s friend and his associates allegedly had drinks with him at an abandoned water plant in Agra and suffocated him using lamination paper, the police said. Then they tried to cover up the crime by passing it off as a Covid-linked death. Sachin Chauhan’s parents approached the police a day after he went missing.

The friend who received the call on Sachin’s behalf also informed the family that the group was currently in Noida and would return to Agra the next morning. However, Sachin’s mobile phone was found switched off after the midnight of June 21. This aroused suspicion in the family’s mind and they lodged a complaint with the police. A Special Task Force also engaged with the police in the investigation of the case. The teams interrogated five people, including Sachin’s friend Sumit, who is the alleged mastermind behind the entire plan.

“Sachin was strangled to death on June 21 itself and his friends cremated him to destroy the evidence. Everyone was wearing PPE kits while performing the cremation, so that no one would find the matter suspicious and everyone would assume that this is a Covid-19 patient’s dead body. Also, at the ghat, the accused had registered someone else’s name instead of Sachin’s name,” said SSP Agra Muniraj G.
Police said that after committing the murder, Sachin’s friends were planning to demand a ransom of Rs 2 crore from his family members, but were arrested before it.”Sachin’s mother had called on his number and someone else picked up and claimed he was unavailable to talk. That was when the parents got suspicious,” Muniraj G, the Agra police chief, said at a press conference. He said the accused had planned to demand the ransom after the murder.
(With Media Reports).