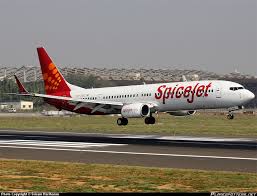 NEW DELHI :Low cost carrier SpiceJet has launched a massive sale, with all inclusive fares starting from Rs 599 for domestic travel and Rs 3,499 for overseas flights.Around 400,000 seats are on offer, with 100,000 selling for Rs 599, according to a company press release. Bookings will take place from 11 to 13 February for travel between 1 July to 2 October.
The tickets on domestic routes such as Hyderabad to Vijayawada, Guwahati to Kolkata, Bangalore to Hyderabad, Delhi to Dehradun, Ahmedabad to Mumbai are all priced at Rs. 599. International flights start from Rs. 3,499 for routes such as Delhi to Kathmandu and other routes. However, flights to Colombo, Kabul and Dubai-Ahmedabad-Dubai sectors are not available.
“At SpiceJet we believe that flying empty seats, which are the ultimate perishable commodity, is a crime,” said Sanjiv Kapoor, chief operating officer in the press release.“These are seats that would otherwise go empty and be lost forever, and are priced based on the marginal cost of carrying an extra passenger, not on the average cost,” he said. “Revenues from such offers contribute incremental revenue for the airline that flows directly to the bottom line.”