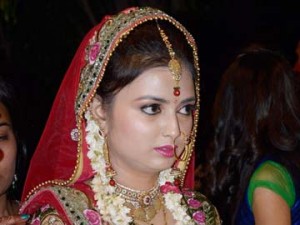 A bride was shot dead at her wedding in Bhopal yesterday, by her own cousin, who accused her of “cheating him.”Dr Jaishri Namdeo, 29, was standing with her groom on a stage, accepting wishes from guests before the wedding rituals, when her cousin, Anurag , allegedly walked up and shot her at point blank range.She was hit in the neck and later declared dead in hospital. Anurag allegedly fired another shot, as if to kill himself, but the bullet grazed a guest.The wedding was at the city’s Lalghati area. This morning, the tent was still standing, now the reminder of a tragedy.
The bride’s relatives caught hold of the shooter and allegedly thrashed him before turning him in, the police say.Anurag told the police that Jaishri had “cheated” him. Senior police officers say their families didn’t know how he felt about his cousin.Jaishri was a pediatrician and the man she was to marry, Rohit Namdeo, is a surgeon.