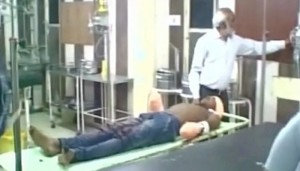 BHATINDA: (Punjab): In a bid to take revenge for the rape of his eight-month-old daughter, the father of the victim on Tuesday chopped off both the hands of the 17-year-old accused in Punjab’s Bhatinda district.The rape incident had taken place in April 2014.
Both accused and the victim’s father, who hail from Kotli Ablu village, were returning from the Bhatinda District Court after the hearing when the latter asked the 17-year-old to accompany him on his motorcycle to the village, while they discussed about a compromise in the case.
Transgender woman inmate raped over 2,000 times in all-men Australian jail.
When they were near Jhumba village, the victim’s father allegedly tied the youth to a tree and chopped off his hands below wrist with a sharp-edged weapon. He also inflicted other injuries on the youth’s body, besides cutting off his hands.

Gang-rape victim was so beautiful, wish I were the first: Philippines presidential contenderReports say that the youth was rushed to a Bhatinda hospital while cops brought his limbs to the doctors later. A case of attempt to murder has been registered against the infant’s father.