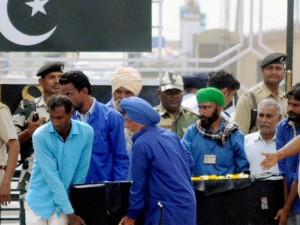 CHANDIGRAH: The body of Indian prisoner Kirpal Singh, who was held captive in Lahore’s Kot Lakhpat prison since 1992, arrived in India on Tuesday. Singh reportedly died under mysterious circumstances, as his family claimed that his body bore injury and blood marks.  The medical board, which conducted a post-mortem examination on Singh’s body, after he was brought back to India, however refuted these claims.

They said that while a few vital organs were missing from Singh’s body, due to a previously conducted post-mortem examination in Pakistan, there were no signs of internal or external injuries.
Ashok Sharma, head of the three-member medical board has been quoted in media reports, saying, “When we opened the body, we found that some of the organs were missing because when post-mortem is done, some organs are taken to test to find out whether there is any disease or not.”

The family of Indian prisoner Kirpal Singh , who died in Lahore’s Kot Lakhpat jail under mysterious circumstances, has said that he and Sarabjit Singh, another Indian national, were killed in Pakistan as part of a conspiracy.
Kirpal Singh’s mortal remains were handed over to India on Tuesday after a post-mortem was conducted in a hospital in Pakistan.His family members alleged that his body bore injury marks and foul play led to his death, but doctors who conducted an autopsy denied this.
Kirpal Singh’s body back in India, doctors say some internal organs missingContrary to the claims, the medical board which conducted the post-mortem examination here said there were no external or internal injury marks on the body.
“In the post-mortem examination, it was found that there was no external or internal injury on the body. Post-mortem of this body has already been done (in Pakistan) because stitches were present on the body and the head.

“When we opened the body, we found that some of the organs were missing because when post-mortem is done, some organs are taken to test to find out whether there is any disease or not,” Sharma said.
After being handed over to the Border Security Force at the Attari-Wagah joint check post, Kirpal’s body was immediately taken for post-mortem examination in Amritsar after which it was taken to Gurdaspur district for cremation in his native village.