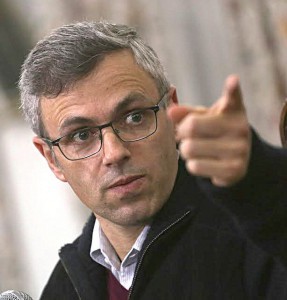 JAMMU: Putting a question mark over the existence of an alliance between the PDP and BJP in the state, former Jammu and Kashmir chief Minister and NC leader Omar Abdullah asked on Sunday that why there was no government in the Valley and said Mehbooba Mufti should break ties with the saffron party and go for fresh polls.

“What has changed in last 10 months that despite the numbers in the assembly they (PDP-BJP) are not ready to form government,” News Agency ANI quoted Abdullah as saying. He further said that although an elected government is not in place, the alliance between PDP and BJP is still intact.
“The agreement as far as our knowledge is concerned, the alliance (between BJP and PDP) still exists. We haven’t heard either from BJP or PDP that alliance has been broken, so the alliance exists and if the alliance exists, then why not government (is formed).

Agenda of the alliance was formed and Mufti sahab was made the chief minister. What has changed in the past ten months that today even though they have numbers in the assembly they are not ready to form the government”, he added.
In the backdrop of a ‘reported’ sour relationship between the top brass of BJP and PDP, Abdullah said, “I am not even ready to discuss any relationship with BJP at this point of time.”

He further hit out at PDP chief Mehbooba Mufti and said that it high time that she must break her silence as she cannot keep the entire state guessing on government formation.
PDP leader “Mehbooba Mufti has been quiet for long and she can no longer remain silent. She must clarify her stand on two-three issues and clear the air as to what are those CBMs and how long she will wait for those Confidence Building Measures and why did the need of CBMs suddenly arise after the demise of Mufti Mohammed Sayeed,” he told reporters on the sidelines of a function here.

Omar also said that National Conference has been telling them time and again that if they are not ready to form the government, they should be bold enough to break the alliance.