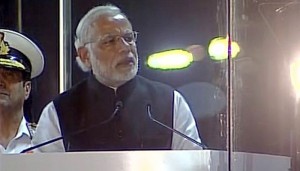 VISHAKHAPATNAM:  Prime Minister Narendra Modi said on Sunday that oceans were critical for the global energy security as over sixty percent of world’s oil production moves through sea routes.
He also said that India’s ability to reap economic benefits from the oceans rests on the capacity to respond to the challenges in the maritime domain.”Threat of sea borne terror, of which India has been a direct victim, continues to endanger the regional and global peace and stability,” the PM said.
PM Modi was speaking at the International City Parade held here as part of the International Fleet Review 2016 where he was the chief guest.
The PM further said, “I am privileged to visit Vishakhapatnam. The city has a special place in the heart of all Indians. My profuse thanks to men and women of Indian Navy for their tireless dedication for making this Fleet Review a truly historic success. My sincere gratitude also to CM Chandrababu Naidu ji for his strong support for this international event.”
“To build on the gains from today’s gathering, India would host the first ever Global Maritime Summit in April this year. ​Vasudhaiva Kutumbakam – concept of whole world as a family– is perhaps most vividly witnessed on the oceans of the planet.
Last time India hosted the International Fleet Review was in the year 2001 in the city of Mumbai. The world of 2016 is vastly different,” PM Modi observed. “At the same time oceans are lifelines of global prosperity. They present us with enormous economic opportunities to build our nations,” he pointed out.
The 30-minute long Operational Demonstration showcased multidimensional operational tasks undertaken by the various arms of the Indian Navy.
The marching contingents of Army, Air Force, Andhra Pradesh Police, NCC, foreign navies and marching bands from the three services and visiting countries participated in the parade along with the host, the Indian Navy.
The demonstration culminated with the address by PM Modi, who also released a book on ‘Maritime Heritage’ during the event.The picturesque Ramakrishna Beach in Visakhapatnam witnessed two events – Operational Demonstration and International City Parade.

Several warships, submarines, naval aircrafts as well as Marine Commandos presented an action-packed display of the capabilities of the Indian Navy.