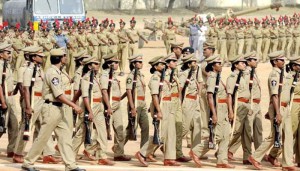 NEW DELHI: Even as the government plans to induct more women into police as part of its empowerment drive, a survey conducted among those serving has found they still grapple with lack of basic amenities like toilets, uncomfortable duty gear and want of privacy.

While on one hand these personnel have to go thirsty for long hours while on duty as there are hardly any toilets around, they say bullet proof or body protection vests provided to them are so tight and heavy that they cause breathlessness, as they are made per the physical requirements of a male body.
The findings of the survey and its recommendations were presented during the 7th National Conference on Women in Police, jointly organised by the Bureau of Police Research and Development and CRPF in Gurgaon early this year.
The conference was mooted some years back to study the problems faced by policewomen and, after discussions with these personnel from the rank of constable to DGP, the suggestions have been forwarded to the government for implementation and framing of new policies.
The results of the survey have become public close on the heels of an announcement by the Union Home Ministry that 33 per cent posts of constables in central forces will be filled up by women, 15 per cent in border guarding forces. It has even urged the state governments to follow suit.
One of the issues that the women officials said required improvement was privacy as the “concept of personal space is different for male and females”.
“While men may be comfortable with locker room banter, women need greater privacy,” the survey conducted by IPS officer and Inspector General in border guarding force SSB, Renuka Mishra, said.
The 1990-batch Uttar Pradesh cadre police officer talked to a sample group of 334 women personnel, across various ranks, in the Central Reserve Police Force, Sashastra Seema Bal, the National Police Academy in Hyderabad and those in state police force of Punjab, Uttar Pradesh, Telangana, Maharashtra, Gujarat and Odisha, apart from sourcing such content from reports prepared by a Parliamentary Standing Committee and the 2nd Administrative Reforms Commission.
The survey found while women cops go on long spells of no water to avoid urination, it is also hard for them to find a proper place to wash their clothes and even to dry their undergarments while on job.