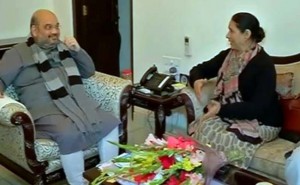 NEW DELHI : Former Union minister and Congress leader Krishna Tirath will formally join the BJP this evening. The Delhi veteran met BJP chief Amit Shah on Monday morning, taking her party by surprise.
One of the Congress’ most prominent faces in the national capital, Ms Tirath, 59, said after her meeting with Mr Shah, “This is about ideology. I want to serve people and I have come here with that mindset and that ideology only.”
Ms Tirath met Mr Shah even as Ajay Maken, who is leading the Congress’ charge in Delhi for next month’s elections, was holding a press conference. Mr Maken admitted he had “just been told” about Ms Tirath changing camps and said, “It shows the desperation of the BJP, they have to import leaders from other parties because they have no faith in their own leaders.”
In the face of massive embarrassment, Congress leaders said Ms Tirath had left the party in a huff because she was denied ticket for the state elections. She had contested the national elections from Delhi last year and lost to the BJP’s Udit Raj.
Ms Tirath is the latest is a series of prominent women to join the BJP in the run-up to the Delhi elections, after former top cop Kiran Bedi and former Aam Aadmi Party leader Shazia Ilmi joined last week.
She has been a Congress legislator and an MP from Delhi and served as the union minister of state with independent charge for women and child development in the Manmohan Singh government. Also a prominent Dalit leader, her move to the BJP is a setback for the Congress as it attempts to rebuild its base in the capital.
After ruling for 15 years in Delhi, the Congress was almost wiped out in assembly elections held in December 2013. It could win only eight of the 70 seats in the Delhi assembly coming in a very poor third to the BJP and the AAP in a hung House.
With no party in a position to form a government in Delhi after AAP chief Arvind Kejriwal resigned last February having served as chief minister for 49 days, fresh elections will now be held on February 7. Results will be counted on February 10.