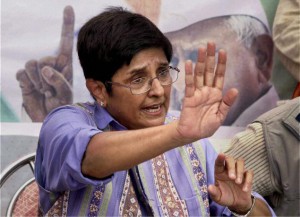 NEW DELHI : Confronting signs of rebellion in its ranks for parachuting in former police officer Kiran Bedi ahead of the Delhi election, the BJP today cautioned a party MP who criticized her publicly.
Manoj Tiwari, one of the seven BJP MPs of Delhi, had said that Kiran Bedi “is a party worker” and must conduct herself like one.
“I didn’t like the way she spoke to BJP workers a few days ago. I wasn’t there…but this is the feedback I’ve got from workers. She should be humble, she has been brought on as a BJP worker. She is not the Chief Ministerial candidate so far,” he told reporters.
The actor-politician also said, “We don’t need someone like a thaanedar (policeman). We need a leader who can take everyone along.”
Sources say a top leader phoned Mr Tiwari and asked him to explain his remarks after an upset Kiran Bedi called the party leadership.
Mr Tiwari was also one of the two MPs who skipped Ms Bedi’s tea party on Sunday for parliamentarians from Delhi.
By warning him, the party has given a message to Delhi leaders who have been seething with resentment since Ms Bedi, 65, joined the party last week and was given a starry welcome by its president Amit Shah.
Ms Bedi, a political debutant, features prominently on the party’s Delhi posters leading to speculation that she will be the party’s chief ministerial face.
Kiran Bedi’s tweets have fueled speculation. In tweets today and before, she has indicated that she is prepping to play a key role in Delhi. “Five S for Delhi _Saaksher, Swasth, Sakshum, Surakshit and Sanskari,  Dilli>>>Meaning–.literate,healthy, capable, secure, and ethical!(sic),” she tweeted today.
Delhi BJP leader Jagdish Mukhi, seen as an aspirant for the top post, said, “It is wrong to say that the party is divided… our Delhi unit is completely united and we will win the Delhi elections with 60 seats.”