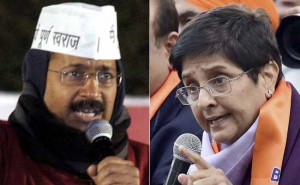 NEW DELHI : Aam Aadmi Party chief Arvind Kejriwal has challenged the BJP’s Kiran Bedi to a two hour public debate. Ms Bedi has accepted the challenge, but says she will debate him “on the floor of the assembly.”
Last night, the BJP acknowledged Arvind Kejriwal as the man to beat in Delhi, when it picked as its chief ministerial candidate not a seasoned party veteran but former top cop turned activist Kiran Bedi, who joined the party and also politics only four days ago.
“Congrats 4 being nominated as BJP’s CM candidate. I invite u 4 a public debate moderated by neutral person n telecast by all,” Mr Kejriwal tweeted this morning.
He later said that a two-hour long debate should be held before the elections at a location of Ms Bedi’s choice.”This will be a good first for a democracy. Both the candidates should have a debate on local issues which should be telecasted, so that people can make an informed choice,” said Mr Kejriwal.
“Arvind only believes in debate, I believe in delivering. Debates will happen on the floor of the Assembly,” Ms Bedi shot back, saying she was accepting the challenge.