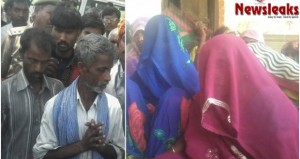 LUCKNOW : As pressure continued to mount on the Akhilesh Yadav government in Uttar Pradesh over a spurt in crimes against women in the state, the Central Bureau of Investigation (CBI) took over the probe of Badau gang-rape and murder case on Thursday.
A CBI team headed by DIG Neeraj Kumar and nineteen other officials will head to Badaun district soon with forensic experts to examine the case.The two cousin sisters aged 14 and 15 were allegedly raped and later hanged from a tree May 27 in Katra Sadatganj village of Badaun district, causing a national uproar. All the six accused, including a policeman, have been arrested in connection with the case.
Few days ago, a special investigation team (SIT) of police in Uttar Pradesh’s Badaun district began probing the gang-rape and murder of the two minor girls.
The victims’ family and political parties like the Congress and the Bahujan Samaj Party had advocated CBI probe into the case. The Centre on Tuesday recommended CBI probe into the horrific incident.Meanwhile, the National Commission for Women (NCW) has demanded UP Chief Minister’s resignation in the wake of several rape cases being reported from the state.
Speaking to reporter, NCW chief Mamata Sharma slammed the Samajwadi Party government and demanded demanded Akhiesh Yadav and Director General of Police AL Banerjee’s resignation.Banerjee had said that property could be a motive behind the Badaun murder and that rape of one girl is not yet confirmed.
“Of the two victims, one was the lone child of her parents. Her father is one of three brothers with limited resources and if she was not alive, it could benefit others. It could be one of the motive. I am not saying that this is the motive,” Banerjee had said in a press conference.The state DGP also said, “Badaun gang-rape can be a case of horror killing, although it is not confirm yet.”The recent spurt in increase in rape cases in the state has come as a major embarrassment for the Akhilesh Yadav government.Crime against women have witnessed a sudden spurt in the state and on an average, 10 cases of rape are being reported every day.
In a recent incident, a woman was gang-raped by four policemen, including a Station House Officer (SHO), when she had gone to the police station to meet her husband detained in connection with a case.The woman was allegedly gang-raped by SHO and three constables for two hours inside the premises of the police station.
Following this, the alleged victim lodged a complaint and Hamirpur Superintendent of Police Virendra Shekhar assured the woman that no one would be spared if found guilty.In another incident, a 14-year-old girl in Sambhal area was raped by two police constables few days ago. The cops have been arrested and placed under suspension.
A middle-aged woman was on Wednesday found hanging in a Bahraich village.Body of a 14-year-old girl was found on Monday morning in sugarcane fields in Bijonore following which locals protested and blocked the roads leading to the city.