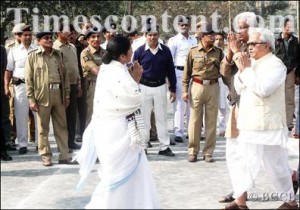 KOLKATA: After political analysts’ warning, Left leaders discussion over a cup of tea with Chief Minister Mamata Banerjee, former came under severe censure from party carders who “saw dialogue was nothing but an abject surrender to a principle less political convenience.’’
Though Left leaders fudged the blame saying, “such discussion was part of democratic process, in 1972 even Jyoti Basu met the then chief minister SS Ray (but none remembered what transpired between two leaders on law and order issue),’’ said Biman Basu, reacting to a flood of anti-leadership anger and frustration among Lelt cadres.
“This would further reinforce disillusionment among them and actuate them to join a more powerful political establishment, may be BJP!’’ said a veteran Left leader.“Biman Basu’s explanation wouldn’t leave us satisfied,’’ said a local leader, expressing surprise over the unsaid political alliance with a party which this week “ruled out a normal human preference on using to colour buildings, houses with any other colour barring blue and white because it appeased a planet!’’ Wondered an economist! “Because if one choose these colours our government will give them tax relief!’’ said Firad Hakim, state minister for municipal affairs.
“Do you call it democratic or pragmatic? It came from narrow astrological advise and an equally narrow minded Stalinist tendency to appease one’s own belief and impose it on a vast majority of people with a price tag,’’ said a political commentator.