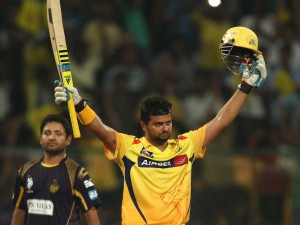 NEW DELHI :Suresh Raina was the toast of his teammates as his swashbuckling innings ensured that Chennai Super Kings had their first silverware since winning the Indian Premier League in 2011. In the process, CSK’s most prolific top-order batsman, Raina set a handful of records in the Champions League Twenty20.
Raina, who smashed 109 off just 62 balls in the final vs Kolkata Knight Riders in Bangalore on Saturday, became the first Indian batsman to hit a hundred in the Champions League Twenty20. He is also the first Chennai player to have a three-figure score in the tournament. Incidentally, the top five innings (all scores of 80-plus) by Chennai’s batsmen all belong to him. This is also his sixth score of over fifty in the CLT20.
With 842 runs in 24 matches at an average of 38.27, Raina has set a new record in the CLT20. The devastating left-hander, who has shown an uncanny knack of turning up in crucial encounters, also has three fifty-plus scores in the finals of Tweny20 competitions, which is the most by any batsman. On Saturday, he became the eighth player overall to register a ton in the CLT20, however the credit of posting two hundreds belongs to Australia’s explosive opener David Warner. Warner and Raina are the only two players to have scored centuries in both the IPL and CLT20.
Raina’s 16 sixes are the most by an Indian batsman in a single edition of the CLT20. In his stroke-filled essay of 109 vs KKR, he hit eight towering sixes, becoming the first Chennai player to do so twice after having scored as many sixes in his 43-ball knock of 90 vs the Dolphins earlier in the tournament. He also became the first Indian batsmen to post three hundreds in Twenty20 cricket. After Saturday’s heroics, Raina now has the distinction of being the first player to score a century against the Kolkata Knight Riders in CLT20.