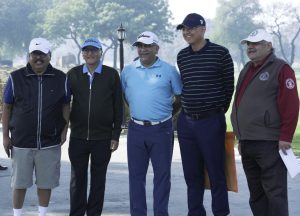 NEW DELHI : The Old Students’ Association (OSA) of Hindu College organized the 15th Annual Golf Tournament . More than 120 enthusiastic Golfers participated in it. At the Qutab Golf Court. Several  famous personalities of the country and distinguished alumni of Hindu College participated in this tournament and enjoyed it with their old friends.
Ravi Burman, President, OSA, said, “This is the 15th year of this golf tournament. It is an alumni bonding event. Everyone looks forward to it as it is a great occasion to reminisce about our college days. When we started this tournament, we had around 30 golfers, today we have more than 500. That’s been the major push.”
This tournament proved to be the best opportunity for new and old alumni to connect with each other. Reminiscing the old days of Hindu College, all the alumni expressed a desire to help the current students in higher education. On this occasion Vivek Nagpal, Founder, Rosmerta Group was the Chief Guest. Union Minister Arjun Munda,and Rao Inderjit Singh, Minister of State (Independent Charge) of the Ministry of Statistics and Programme Implementation; Minister of State in the Ministry of Corporate Affairs and Minister of State (Independent Charge) of the Ministry of Planning were the guests of Honour.
The winners are  Longest Drive overall – Sanjay Kataria, Golden Years – Swaran Singh Chawala, Runner up Ladies – Ivleen Khurana Winner Ladies – Ritu Chaddha and the  Winner Invitee are  Pradyuman Tripathi, Runner-Up Nett – Jaskaran Khurana, Winner Nett – Mahindra Kumar Mohanty Runner-Up Gross -Vikram Bahri and Winner Gross – Keshav Kapoor. Winners were given trophies and souvenirs. 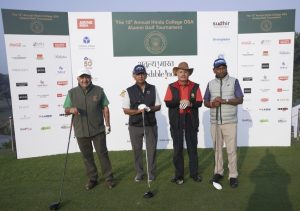 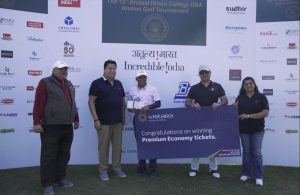