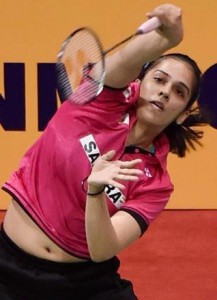 NEW DELHI: Saina Nehwal on Saturday scripted history by becoming the first Indian woman shuttler to attain the number one spot in world rankings, reaffirming her status as the country’s most consistent performer in the international circuit.
The 25-year-old zoomed to the top after her closest challenger for the position, Spain’s Carolina Marin, lost in the India Open Super Series semifinal here.Though the official rankings will be out only on Thursday next week, Saina has been assured of her ascent to the top owing to the reigning world champion’s 19-21 23-21 20-22 loss to third seed Thai Ratchanok Intanon.
Saina thus becomes only the second Indian overall to be world number one after Prakash Padukone had the distinction of being the numero uno men’s badminton player.Saina plays Japan’s Yui Hashimoto in the second semifinal but the Indian ace will be No. 1 irrespective of her result on Saturday.
The London Olympic bronze-medallist has won a staggering 14 international titles in her glorious career and most recently she became the first Indian woman to make the finals of the prestigious All England Championships in Manchester.
“Number one is at the back of mind right now. The only thing I am focussing on is playing all the tournaments and I want to win them,” Saina had said when asked about the ranking.
“I want to perform well and beat the players against whom I was losing. I don’t want to lose the way I was losing in the last three years. I want to be more consistent. When you are playing well, other things fall in place”, she said.If Saina loses in semifinals, she will finish with 75,761 points after pocketing 6,420 for reaching the last four.
Carolina, on the other hand, will gain 6,420 points for her semifinal finish here which will take her total points to tally to 73,618.The injury-ravaged Saina, who admitted that it is “tough to maintain rankings”, said she remains intent on achieving consistency.

“It [has been] tough to [remain] in the top-five for the last seven years. I hope to maintain it for some more time. I feel good. At the same time I have to work hard everyday, train everyday. It is [tiring]. I want to be the best. It is my personal choice, fight against the top players. I want to be one of the top players in the world,” she asserted.
“Everyone dreams of winning World Championship, Olympics and I am one of them. It is not that right now I want everything. I want to be a little cool and relaxed and enjoy my game. It’s my job and I want to enjoy it,” she added.
The Hyderabad-based player has several firsts to her credit in Indian badminton. She was the first to be a junior world champion, besides being the first to clinch a Super Series title.
Initially groomed by former All England champion Pullela Gopichand, Saina is currently under the tutelage of former national champion Vimal Kumar.
The trailblazer was awarded the country’s highest sporting honour — the Rajiv Gandhi Khel Ratna award — in 2010.