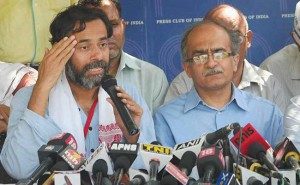 Amidst allegations of hooliganism, intimidation and the murder of democracy, the Aam Aadmi Party’s national council (NC) on Saturday booted out founder members Yogendra Yadav and Prashant Bhushan from the party’s national executive. A process has now been set in place to remove them from the party altogether.
Along with Mr. Yadav and Mr. Bhushan, senior leaders Anand Kumar and Ajit Jha, who were representing the two during negotiations with the party’s top leadership, were also voted out of the executive. The final numbers, as confirmed by the party’s general secretary Pankaj Gupta, showed that 247 members of the NC voted to remove the four, eight were against it, two gave dissent notes and 54 abstained.
However, the numbers only tell half the story. A turbulent meeting of the party’s highest policy making body at a resort near Gurgaon began with much drama in the morning after Mr Yadav sat on dharna outside the gates to protest what he claimed was the unfair exclusion of several NC members who were not permitted entry to the resort. All around him, pro-Kejriwal supporters shouted slogans urging the AAP to ‘throw out the traitors’. Then, in another twist, the party’s internal Lokpal, Admiral Ramdas (retd) said he was advised against attending the meeting through an internal communication, in order to ‘avoid confrontation’.
Mr. Kejriwal then arrived at the venue and walked straight past Mr. Yadav. According to sources, the Delhi Chief Minister started proceedings by making an emotional speech in which he attacked Mr.Yadav and Mr Bhushan for working toward the party’s defeat in the Delhi elections. He then abruptly left the venue saying that senior leader Gopal Rai would chair the meeting. However, it was Delhi Deputy Chief Minister Manish Sisodia who then took the stage and moved a resolution to remove the dissident leaders.

‘Kejriwal camp hired bouncers’
Mr. Yadav and Mr. Bhushan then came out of the venue soon after to speak to media. Both claimed that they were not even allowed to speak and that members of the Kejriwal camp had hired ‘bouncers’ to beat up their supporters.
“What happened inside was a mockery of any notion of democracy. The Lokpal was not allowed inside because of what he would have witnessed, Mr Yadav claimed.
The two leaders said that soon after Mr. Kejriwal’s speech, his supporters started shouting and heckling them. When one of their supporters Ramzan Chaudhury got up to speak, they claimed he was beaten up by bouncers as Mr Kejriwal looked the other way.

“There were unrecognisable faces and non-members in the meeting and members were not allowed inside. Our supporters were thrashed. When I asked Arvind to get them to stop, he sat like a staue,” Mr. Yadav alleged later at a press conference. Mr. Bhushan said, “What he (Kejriwal) has displayed today is that he is willing to use his dictatorial powers to ruthlessly stifle dissent and ruthlessly stop discussion or opposition to what he wants.”
These claims were swiftly countered by AAP leader Ashutosh who took to twitter to issue a series of clarifications.“YY/PB Should respect the verdict of the highest decision making body of the party if they believe in internal democracy.” he said.
“Media should not buy a cooked up story of man handling and presence of bouncers. YY/PB Is (sic) spreading lies,” he added.
After the four expelled leaders then moved away from the meeting venue the national council meet continued without them. A senior party functionary told  that the next piece of business discussed was the expulsion of the four from the party altogether.
He said the party had referred the matter to a disciplinary committee those in charge of the respective state units represented by each been have asked to begin proceedings for the purpose.