NEW DELHI : Union Defence Minister Arun Jaitley has sought an explanation from senior officials in his ministry on how passages imputing motives to former Army Chief and now MoS for the north east, external affairs and overseas affairs V K Singh were part of an affidavit filed in the Supreme Court on 4 June, shortly after the BJP-led NDA government assumed office
The Congress, meanwhile, seized on the embarrassing contents of the affidavit and demanded General V K Singh’s resignation from the union council of ministers, saying the NDA government’s affidavit on the issue of Lt Gen Dalbir Singh Suhag’s promotion to the post of Army Chief was an expression of “no confidence” in him.
“The minister cannot remain in the council of ministers,” Congress spokesperson Abhishek Singhvi told journalists, adding, “It’s a matter of detail whether he is removed or he resigns.”
Indeed, the fact that the affidavit filed by the defence ministry has indicted General Singh for violating the principles of natural justice and resorting to “unjust” means to clamp a disciplinary and vigilance ban on General Suhag has come as a major embarrassment for the Modi government.
While senior BJP sources said that since General Suhag was already Army Chief-designate when the Modi government took over, it did not wish to undermine his position as that would demoralise the army, it now appears that when the affidavit was filed in response to an appeal filed in the Supreme Court by Lt. General Ravi Dastane against an order passed by the Armed Forces Tribunal on 6 September, 2013, clearing General Suhag of the charges made by General V K Singh, the defence ministry had not just gone with the line of the previous UPA government, but used very harsh language against him.
The affidavit accuses General V K Singh of taking an “illegal, premeditated” course to stall the promotion of Chief-designate Lt. General Dalbir Singh Suhag, as Army Commander of Eastern Command in 2012 ( something that would put him in line for Army Chief) by citing “certain lapses in the chain of command” concerning an intelligence operation in Dimapur. 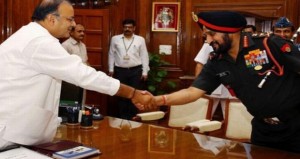 The affidavit also says that General V K Singh had directed administrative action against General Suhag even though a Court of Inquiry proceedings found no “lapse or blame” on the latter’s part. The affidavit repeatedly said that General Suhag was on annual leave and not in Dimapur at the time of the incident.
The ministry highlights the fact that General Suhag was given only seven days’ time to show cause against the ban imposed on 19 May, 2012, shortly after the Defence Minister independently approved General Suhag’s name as Army Commander and forwarded the proposal to the Appointments Committee of the Cabinet.
It was finally left to General Bikram Singh, the current army Chief, to lift the ban in June 2012, merely a week after he took over from General V.K. Singh. Closing the inquiry on 7 June, 2012, the affidavit revealed how the ban and issue of show cause notice was “without merit, illegal, pre-meditated and against the principles of natural justice, and hence closed after consideration of case by the new COAS (Chief of Army Staff), who succeeded Gen. V.K. Singh”.
When General V.K. Singh’s spokesperson was contacted, he said that that as MoS he is “out of the picture” as far as defence matters are concerned and would prefer to talk about issues concerning only his ministry portfolios.
This development is part of an appeal filed by Lt. General Ravi Dastane against an order passed by the Armed Forces Tribunal on 6 September, 2013, dismissing his claims that the Army Chief had shown “undue hurry” to close the case against General Suhag due to favouritism.
The appeal is scheduled for hearing in September later this year before the Supreme Court, posing the problem whether it would become infructuous once General Suhag takes over as Army Chief on 31 July.