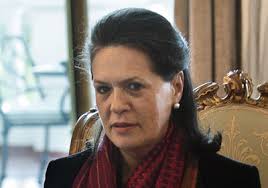 NEW DELHI :When the BJP’s Rajiv Pratap Rudy taunted the Congress in the Lok Sabha today for having slipped to 44 seats, Sonia Gandhi’s expression betrayed how distressed she was at the scale of her party’s rout.
She looked angry when former ally Ram Vilas Paswan told the Congress: “You might not have got votes in the name of Sonia Gandhi but we got votes in the name of Modi.”
All indications suggested the next five years would be really difficult for Sonia, who was even a few weeks ago being described as one of the world’s most powerful politicians.But the smile was back on her face minutes later. She was joyously thumping the desk and looked prepared to go to battle.
Party colleague Mallikarjun Kharge had just shot back at the ruling alliance: “Don’t think you can suppress us because you are 300 and we are 44.”

Kharge went on: “Hum dabne wale nahin hain (We can’t be cowed down). The Kauravas 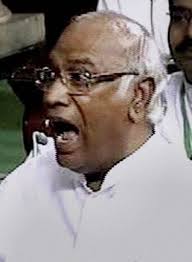 were big in numbers but the Pandavas never gave in. If you (the BJP) can rise from two seats (in 1984) to 282, we can go to 440 from 44.”Sonia congratulated Kharge as he  finished, her cheerful expression appearing to reflect a hint of a boast: “Yes! I made the right choice.”
She had overlooked the veteran Kamal Nath, the formidable Amarinder Singh, the astute Veerappa Moily and the young brigade to appoint Kharge the Congress leader in the Lok Sabha, attracting widespread criticism.But the popular politician from Karnataka, serving only his second Lok Sabha term, made enough of an impact in the House today with his sharp and substantial attack on the government.
What Kharge lacked in rhetorical flourish, he made up with aggressive intent. He harnessed statistics and commonsense logic to defend the Manmohan Singh government’s performance and warn the BJP against arrogance.
“Don’t give election speeches here; you have already won,” he told the ruling dispensation.“That kind of speech is good to fool the people but here in Parliament we want a concrete road map and time-bound commitments. You have got the mandate and now you should serve the people.”Dismissing the BJP charge that the Congress did nothing in the past 65 years, Kharge said: “We didn’t (even) have companies to make needles and today we go to the moon. We suffered from hunger and now food stocks are at a record level.”
He went on: “All the PSUs, we made. The Green Revolution came in our time; the White Revolution in Gujarat was not brought by (Narendra) Modi. The MGNREGA (rural job guarantee scheme) gave jobs to over four crore people who didn’t have anything. Don’t distort history.”
Describing the BJP as a master of marketing, he said: “We lost the election but our record is better than yours. The average economic growth under the UPA was two per cent more than the NDA’s. Food production, power generation, rural road construction, health care… everything improved significantly.”
Kharge said there were “three crore mobile phone” connections in India when the BJP was voted out in 2004, while the figure was now “96 crore”. He described the Right to Education Act as “a landmark legislation”.
“But we lost because you are good in publicity. You sold the Gujarat model; Gujarat was not number one in per capita income, investments, education, nutrition, health parameters — but you sold it.”As Sonia thumped her desk, Kharge carried on despite continuous interruptions and protests from BJP members.“There is nothing in the presidential address except vague promises and repackaging of old schemes. You didn’t outline what you will do in the next 100 days,” Kharge said.
“Don’t forget, only 31.32 per cent people voted for you. Around 69 per cent people are still opposed to your ideology. We lost because the vote against your ideology was divided. And don’t assess our strength on the basis of 44 seats: over ten crore people have voted for us.”By the time Kharge finished his speech, he had accomplished two things. One, he had won Sonia’s trust and two, he had signalled to the BJP that the Opposition’s numerical weakness should not be presumed to be an automatic advantage.
His reference to the Mahabharat, with a Kaurava-Pandava comparison, created a buzz in Parliament’s corridors. Congress spokesperson Abhishek Singhvi later said: “The notions of infallibility and arrogance can be dangerous…. Power is transient and pride comes before a fall.”
The Congress is waiting for the government to take a call on the subject of the leader of the Opposition, which is expected to provide a peek into the BJP’s attitude towards democratic norms.Congress leaders are privately saying that a denial of the post to any party would “expose the BJP’s true intentions” and help the Opposition build a case against the ruling combine.