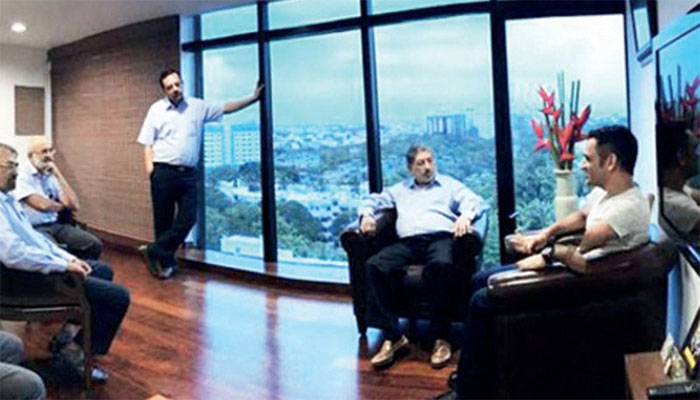 CHENNAI : In another case and at another place, one would have called it just another day in office. But it was not a normal day, it was not any other office and he surely is not any other person. Because, Mahendra Singh Dhoni does not visit office every day. Does he?

The day after the first ODI between India and Australia in Chennai, Dhoni visited the corporate office of India Cements Limited (ICL). It was for the first time he was visiting the ICL, the owner of which, by the way, is a certain N Srinivasan. Lest one forgets, the ICL also owns the Chennai Super Kings.

Former Team India skipper MS Dhoni enjoyed a special home-coming as he played a match-winning knock in the 1st ODI against Australia in Chennai. Other than his splendid knock, what also gathered a lot of spotlight, was his visit to the corporate office of Indian Cements Limited (ICL). Interestingly, it was the first time that Dhoni visited the ICL, owned by none other than N Srinivasan. ICL also owns Chennai Super Kings, the IPL team.

Dhoni is the Vice President-Marketing of ICL. He spent almost half the day there, meeting the staff, visiting the gym apart from interacting with the senior management and ofcourse an one-to-one session with Srinivasan.  The CSK outfit has made their intentions clear of getting back Dhoni in their set up, and this particular meeting will surely delight the fans even though it is to be believed that the Dhoni’s visit was purely ICL related.
The CSK officials, however, strove to play down the visit stating that not much should be read into it. “As he was in Chennai, he wanted to visit the office, meet Mr Srinivasan and find out for himself how the office works,” Kasi Viswanath, a close aide of Srinivasan told The Mumbai Mirror.

“It is no secret that CSK want Dhoni but we are still waiting to hear from the Board of Control for Cricket in India (BCCI) on the way forward for the league.” The visit is a significant one considering that Chennai Super Kings, after serving two-year suspension, are back in the IPL.
( Mumbai Mirror With Agency Inputs)