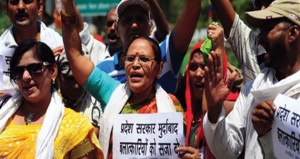 GONDA (UP) : A 45-year-old woman was allegedly raped by a youth in Khargupur area of  the district, police said in Gonda on Tuesday.The accused, identified as Nanke Yadav (22), dragged the woman to an isolated place while she was sleeping outside her house and raped her last night.
The woman today met Superintendent of Police Bharat Singh Yadav and lodged a complaint after which an FIR was lodged against Nanke. He has been detained. The SP said that the woman had been sent for a medical examination. Further action would be taken based on the report.