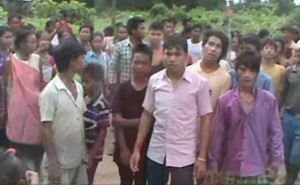 GUWAHATI: A 63-year-old woman was stripped naked and beheaded by a mob of nearly 200 people in Bhimajuli village of Assam’s Sonitpur district today.
The woman, who had been branded a witch, was dragged out of her home and taken to a nearby stream, where she was stripped and attacked, the police said. Seven persons have been arrested in this connection.
Poni Orang’s village is predominantly occupied by the Karbi tribe, and also has a sizable Santhal population.
“Anima Ronghanti, 35, who claims to be a goddess, had asked the people to gather at a local temple,” said Additional Superintendent of Police Samad Hussain. She told them Orang, an adivasi woman and a mother of five, was a witch, and would bring bad luck to the village.
“Following this, the mob rushed to Orang’s house and dragged her out, took her to a nearby stream, almost stripped her naked and beheaded her in broad daylight,” he said.The police have arrested Ronghanti, her husband, her elder sister and four others.

The incident comes at a time when the Assam government is contemplating an anti-witchunt law in the state.Over the last five years, more than 100 woman have been killed in similar witch hunts in the state. This was the fifth case of witch-hunt in the area, called Biswanath Chariali, over the last 10 years.