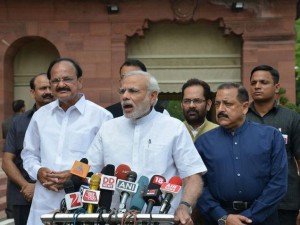 NEW DELHI: As Parliament began its Monsoon Session, the government said that it is ready for a debate on “Lalitgate” – the controversy that has engulfed two of its top leaders.
Before Parliament’s 21-day session began, the Prime Minister said he is “hopeful of a constructive meeting” and is counting on the Opposition’s support to clear urgent reforms “for the progress of the country”.The Lok Sabha was adjourned before noon as a mark of respect for members who have died.
In the Rajya Sabha, Finance Minister Arun Jaitley faced an angry Opposition that shouted slogans which included a demand to “bring Lalit Modi back”. The billionaire moved to London a few years ago after being named in a series of corruption cases.
Foreign Minister Sushma Swaraj will explain her decision to help tainted cricket mogul Lalit Modi get urgent travel papers, said Mr Arun Jaitley to the Opposition. “We are ready for a discussion right now,” he said.
Ms Swaraj intervened with UK immigration officials last year to help Mr Modi travel to Portugal where his wife received medical treatment. She has said her help was on “humanitarian grounds”; the Opposition says she misused her office to assist a “fugitive”.
Rajasthan Chief Minister Vasundhara Raje signed an affidavit backing Mr Modi’s appeal to live in the UK. The Opposition wants her removed from office and points out that she asked for her affidavit to be kept secret from Indian officials.
The Congress says it will not let Parliament function unless Ms Swaraj and Ms Raje are removed, along with Madhya Pradesh Chief Minister Shivraj Singh Chouhan, whose government is beleaguered by a job recruitment or Vyapam scam.
Sonia and Rahul Gandhi, the Congress’ top leaders, will lead protests outside Parliament tomorrow; within, they have pledged to disrupt proceedings.
The government has ruled out resignations of the trio of leaders targeted by the Congress; it has decided to aggressively counter the Opposition.”The government has no intention to prevent any debate. We have nothing to hide,” said Parliamentary Affairs Minister Venkaiah Naidu this morning.