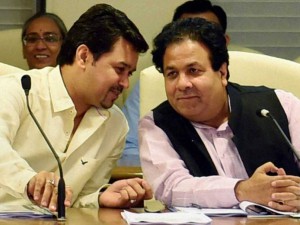 NEW DELHI: The BCCI is proceeding cautiously on the demands for the removal of Chennai Super Kings (CSK) and Rajasthan Royals (RR) from the IPL in the wake of a judicial committee order over betting in 2013 edition owing to legal implications in adopting such a course.
Giving this overview, top BCCI sources said all legal options are being explored but Indian cricket’s apex body does not want to face legal problems later in case of axing of the two teams because of the clear order of Lodha Committee.
The committee, while suspending Gurunath Meiyappan and Raj Kundra for life for betting, handed down a two-year suspension on CSK and RR for the action of their team owners, who indulged in betting and consequently brought the game to disrepute.
Former BCCI president Shashank Manohar is a vocal supporter of immediate termination of CSK and RR from the IPL and his confidant Ajay Shirke put up this demand at the governing council meeting on Monday.
BCCI sources said that a similar decision in the case of another IPL team Kochi Tuskers Kerala a few years ago, at the insistence of Manohar, had backfired with an arbitration award favouring a payout of Rs 550 crore for the disbanded Kerala franchise on grounds of wrongful termination.
It is another issue that the BCCI is likely to challenge the arbitration award.The sources said that BCCI does not want to face another situation like the Kochi issue and want to tread cautiously.

“All the senior BCCI members distinctly remember how Manohar, who was advising the BCCI on the Kochi issue (in 2011), one Saturday decided on termination. Some of the senior members were of the opinion that we should wait till Monday. But Manohar was insistent that we should go ahead and encash the bank guarantee. They moved court and now BCCI has to pay a compensation of Rs 550 crore,” an influential BCCI official told PTI on conditions of anonymity.
“Although we are appealing against the verdict but many still believe termination of Kochi was a decision taken in haste. Now the same man (Manohar) wants CSK to be terminated as soon as possible. Will BCCI care about cricket or just fight legal battles in court. What is the guarantee that CSK won’t go the Kochi way,” the official further added.
“Even if there is a bit of delay, the decision taken should be a solid one and without putting the burden of legal hassles on BCCI’s part,” he concluded.