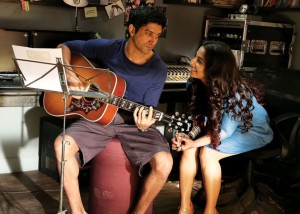 MUMBAI : A man hits on a lonesome woman at a nightclub. The conversation reveals that both are married.My workaholic husband has no time for me, the lady laments. My wife is busy watching television serials, retorts the guy. The two head to a hotel room for a one-night stand. They are caught on the security cameras in the corridor. The errant man is summarily summoned to the manager’s office and sternly ticked off. This is not “that kind of hotel”, he is told.Turns out that the man and the woman are married to each other and this is their way of spicing up their relationship.
The sheepish hotel manager, left with egg on his face, finds himself at the receiving end of free tips on how best to keep his wife in good humour.One crucial piece of advice that he receives goes thus: Marriage is… always having to say sorry. When you make a mistake, you apologise. When the wife makes a mistake, you still apologise. And life goes on… If you think that opening sequence, with its sly but predictable flurry of witticisms, is comical enough, you might also like the rest of Shaadi Ke Side Effects. The film unfolds in pretty much the same vein.
On a basic plot level, director Saket Chaudhary’s second film seems to have drawn inspiration from the 1988 John Hughes comedy, She is Having a Baby.The Hollywood film ended with a pregnancy; Shaadi Ke Side Effects employs the birth of the baby as the starting point of the story. The wafer-thin tale is livened up by some snappy writing and competent acting all around. The principal characters, struggling musician Siddharth and successful adwoman Trisha, are generally likeable and believable. So are the piquant situations that they must grapple with in their bid to balance their individual compulsions with the demands of bearing and bringing up a child.
A bawling baby, a snoring dad and an overprotective mom are the perfect recipe for severe spousal stress.Trisha takes to the job of playing mommy with instinctive ease. It is Sid who makes a complete mess of the attempt to be “the best dad in the world”. The screenplay (Zeenat Lakhani and Saket Chaudhary) ensures that the plot remains firmly rooted in the realms of reality.
However, the efforts to blend humour, emotion and philosophy do not always come off.One good aspect of Shaadi Ke Side Effects is that it plunges into the business end without much fuss. So there is no whirlwind romance or fairy-tale wedding or heady honeymoon before the complications brought on by dull domesticityintervene.The first half of Shaadi Ke Side Effects is somewhat listless. But the film perks up considerably post-intermission. Staid Sid, egged on by his sis-in-law’s hubby Ranvir (Ram Kapoor), decides to turn overly adventurous in order to put some spart back into his marriage.
That triggers a series of missteps that put his relationship with his wife in serious jeopardy.Shaadi Ke Side Effects, via the words of Ranvir, hands out some dodgy pop psychology to justify a somewhat far-fetched ‘formula’ for a happy marriage.White lies, some harmless subterfuge and an occasional return to the joys of a “carefree single life” are offered as a way out of marital drudgery.
Sure enough, the side effects of that formula are far too many for comfort and they boomerang many times over on Sid.Shaadi Ke Side Effects isn’t exceptionally engaging fare. It is essentially a single idea stretched to the very end of its tether.Yet, the sheer ordinariness of the circumstances that the story hinges on helps the film retain its amusing core.Trisha, rational working woman turned emotional nut case, puts her career on hold and relegates her hubby to the fringes of her life. She frets and fumes obsessively and excessively about her daughter’s needs and over putting on weight. Sid, too, is a guy next door seeking avenues to move beyond singing jingles.
You don’t have the looks of a musician, he is told by a newfound pal – “an accountant, a salesman, a Maoist, but not a musician.” That indeed makes him all the more real. Sadly, a large part of Shaadi Ke Side Effects, despite charming pivotal performances by Farhan Akhtar and Vidya Balan, has nothing new to offer beyond convenient homilies on gender politics within the confines of a marriage.
The supporting cast members – notably Ram Kapoor, Ila Arun, Purab Kohli and Vir Das (in what is billed as “a not so special appearance”) – are first-rate. However, Rati Agnihotri, in the role of the female protagonist’s widowed mother, is wasted.Shaadi Ke Side Effects is recommended because, despite its flaws, it is passable fun while it lasts.