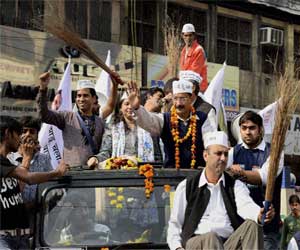 GAZIABAD : Aam Aadmi Party (AAP) chief Arvind Kejriwal today launched his three-day yatra in the politically significant Uttar Pradesh with a focus on Lok Sabha election, due by May.Mr Kejriwal’s 500-km rally, which started from the party office in Kaushambi in Ghaziabad this morning, will cover over 15 Lok Sabha seats in the state.
“Nothing will change if BJP comes to power, country will continue to bleed because of corruption. Our enemies are price rise, corruption and communalism and other parties aren’t doing anything about these issues,” Mr Kejriwal said just before embarking on the yatra. The yatra will reach Shahabad in Hardoi via Hapur, Amroha, Moradabad, Rampur and Bareilly on the first day.
On Sunday, the roadshow will start from Hardoi and proceed to Unnao and reach Kanpur where Mr Kejriwal will address a rally. In Kanpur, he will also meet leaders from business community and social organisations.On March 3, the road rally will head to Delhi covering Auraiya, Etawah, Firozabad, Agra, Mathura and Palwal.
“UP is dominated by caste and religion politics and we want to replace it with politics of development. The state is backward and we intend to target other parties over a number of issues plaguing the state,” said senior party leader Manish Sisodia, who is accompanying Mr Kejriwal in the roadshow.
“Corruption, dynastic politics and criminalisation of politics are the main issues we will target in UP. Also, power is another important issue we intend to target as it is bigger problem than Uttar Pradesh,” said another party leader and UP in-charge Sanjay Singh.The party has over 3.5 lakh of volunteers and members in Uttar Pradesh and has high hopes pinned on the state, especially the area around the National Capital Region.
Launching his party’s campaign last week for the Lok Sabha polls, Mr Kejriwal targeted BJP’s prime ministerial candidate Narendra Modi over the controversial gas pricing issue at a rally in Haryana’s Rohtak.
In his 45-minute speech at the rally in Rohtak, his first after quitting as Delhi Chief Minister, the 45-year-old taxman-turned-activist-turned-politician also launched a blistering attack on Haryana Chief Minister Bhupinder Singh Hooda, calling him a “property dealer”, referring to the multiple land scams in the state.