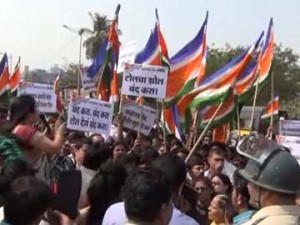 THANE : Several MNS workers were arrested on Monday for vandalizing toll booths across Maharashtra after party chief Raj Thackeray ordered them to make sure no toll tax was paid and “attack” if they were asked for it.
“I am ordering my workers to ensure that no toll tax is charged at any booth in Maharashtra. If anyone asks for toll tax, then phod dijiye, pitiye (attack, thrash them), whatever be the consequences,” Mr Thackeray said on Sunday.
The police say since yesterday, MNS workers have rampaged through toll booths in Mumbai, Navi Mumbai, Thane, Pune, Kalyan, Aurangabad, Nagpur and Nashik, in a repeat of the party’s agitation last year. Additional security has been provided at all such booths and the police are on special alert for trouble.
“We are not anarchists. We were forced to take the law into our hands for public good. Our agitation will continue till the state becomes toll-free,” said Akhilesh Chaubey, head of MNS’ legal cell.
Deputy Chief Minister Ajit Pawar warned of strict action against those behind the violence, asserting that toll tax was “very important for development.”
But even Mr Pawar’s NCP and its partner Congress have joined protests in Sangli against toll tax, which impacts a vast swathe of voters in the state.
Raj Thackeray has accused contractors of overcharging citizens without repairing potholed roads or providing amenities, even after recovering the construction cost.The contractors deny it. “Toll tariff, location and time period have been decided by Supreme Court,” said Jayant Mhaiskar, managing director, MEP Infrastructure Developers.
Mumbai has five entry points, which generate an estimated Rs.2 billion a year from toll collection and are a major source of revenue for the state government.