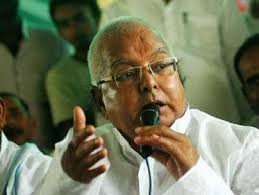 PATNA : The Congress has reportedly decided to ally with regional powerhouse Lalu Prasad in Bihar for the national elections.
Mr Prasad, 66, was recently released from jail after being granted bail by the Supreme Court in a corruption case; the collaboration with him has been allegedly engineered by Congress Vice-President Rahul Gandhi, who has recently been riffing on the party’s commitment to combating corruption.
The alliance will be used by political opponents to allege political inauthenticity. Mr Gandhi, 43, is helming the Congress’s national campaign without being named its prime ministerial candidate. Late last year, he trashed an executive order designed to shield convicted politicians from being evicted from parliament as “nonsense.”
The ordinance would have helped Mr Prasad, but was withdrawn after Mr Gandhi’s intervention, who was worried that it would send the wrong message before elections.
The coalition at the Centre, anchored by the Congress, has been pounded by a series of heavyweight financial scandals. The Congress was also decimated in the recent Delhi elections by the new Aam Aadmi Party (AAP), which has branded itself as a political start-up determined to cleanse a deeply self-serving polity.
But Mr Gandhi’s coalition in Bihar with Mr Prasad covets the complex caste dynamics of the state, which elects 40 parliamentarians.
In 2004, the Congress tied up with Mr Prasad and another regional leader, Ram Vilas Paswan, for a dream run, winning 29 seats. Mr Prasad was rewarded with the post of the country’s Railways Minister.  In 2009, the alliance ended and the Congress emerged with two seats.
Mr Prasad appeals to the state’s Yadavs and Muslims – the two groups make up nearly 30% of the electorate. Mr Paswan and the Nationalist Congress Party will also enter the alliance; together, the four parties hope to stymie the chances of the ruling Janata Dal United, headed by Chief Minister Nitish Kumar.