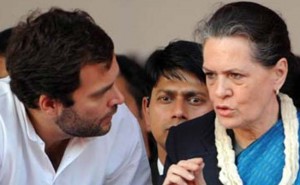 NEW DELHI: After his decision to take “a leave of absence” during a crucial session of Parliament triggered criticism, political controversy, and several Twitter trends, the Congress has announced that its Vice President, Rahul Gandhi, will be back in two weeks. Spokesperson Randeep Singh Surjewala said Mr Gandhi will be back by March 10, but did not elaborate on where Mr Gandhi is.
Congress chief Sonia Gandhi today said at Parliament that she will not comment on reports that her 44-year-old son has left the country in anger over not being allowed to restructure the party they run together, or whether she is considering stepping down to allow Mr Gandhi’s promotion to President.
Mr Gandhi, the fourth generation of the Nehru-Gandhi dynasty which is the pivot of the Congress, has led the party to a series of electoral defeats since it was handed its worst drubbing in a national election last year at the hands of Prime Minister Narendra Modi.

Mr Gandhi wants time to think, party officials said yesterday, and to assess his own role as well as how best to reconfigure the Congress. But there is aggressive speculation that his catalogue of grievances include not being able to replace the “old guard” that has advised his mother with his own team, and that he resents the perception that he is responsible for electoral disasters including last month’s Delhi result, which saw the Congress unable to win even one seat in a city-state it governed for 15 consecutive years.
Mr Gandhi is missing a large chunk of a parliamentary session being used by his party, as well as others in the opposition, to block the government’s planned economic reforms, denounced by critics as “anti-farmer”. For years, Mr Gandhi had positioned himself as a champion of farmers’ rights, pledging that he would not allow their rights to be sacrificed for industrial projects. Now, at a time when that issue is centrestage, he will be missing.