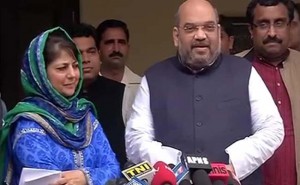 NEW DELHI: BJP chief Amit Shah announced today that his party will partner with the Peoples Democratic Party (PDP) to form government in Jammu and Kashmir, two months after election results were declared.
“There will be an alliance of BJP and PDP in Jammu and Kashmir…in a few days J&K will get a BJP-PDP government”, Mr Shah said after meeting the PDP’s Mehooba Sayeed in Delhi.
Sources say Prime Minister Narendra Modi will meet PDP chief Mufti Mohammad Sayeed tomorrow, and Mr Mufti will take oath as chief minister on Sunday.
Sources said the two leaders will discuss modalities. The BJP is expected to get the deputy chief minister’s post. PM Modi is likely to attend the oath ceremony, sources said.
The two parties, ideological opposites, are expected to govern the state on the basis of a common minimum programme or CMP. They spent the last two months in attempts to bridge huge differences that have divided them for decades.
“After the polls in J&K, BJP and PDP held discussions on a lot of issues…We have reached some sort of consensus on a common minimum program,” Mr Shah said today.
Mehbooba Mufti said, “Government formation is not about power, it is about winning the hearts of the people of Jammu and Kashmir…For the first time an alliance has been done keeping the good and interests of people of J&K in mind.”
Sources said the BJP and PDP have agreed to maintain the state’s constitutional status – a key demand of Mr Mufti, who has firmly opposed any attempt to weaken Article 370, which grants special status to J&K.
On the Armed Forces’ Special Powers’ Act or AFPSA which gives the army the authority to make arrests without warrants, the two parties have agreed to the gradual replacement of the military with the local police and paramilitary forces in areas where the security situation has improved, sources said.
While the PDP swept the Muslim-majority Kashmir valley in the assembly polls, getting the maximum seats, 28, the BJP was close behind with 25, winning its best-ever result in India’s only Muslim-majority state; its gains were made entirely in the Hindu-dominated Jammu region.