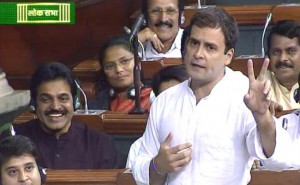 NEW DELHI: The meeting of the National Security Advisors of India and Pakistan held on Sunday is likely to create an uproar in Parliament on Monday. Congress has termed the secret meeting held in Bangkok as a “grand betrayal” of the Modi government and reflection of “flip-flops” over its Pakistan policy.

In a sudden breakthrough in the stalled Indo-Pak dialogue, the National Security Advisors of the two countries met for four hours in Bangkok today and discussed terrorism, Jammu and Kashmir, and other bilateral issues and agreed to take forward the “constructive” engagement.
Meanwhile, Congress MPs led by Rahul Gandhi staged a protest outside Parliament house demanding removal of Union Minister V K Singh for his “dog” remarks.
Leader of the Opposition in Rajya Sabha Ghulam Nabi Azad, Leader of Congress in Lok Sabha Mallikarjun Kharge, party leaders Anand Sharma, Deepender Hooda and several others participated in the protest held shortly before the Lok Sabha and Rajya Sabha assembled for the day.