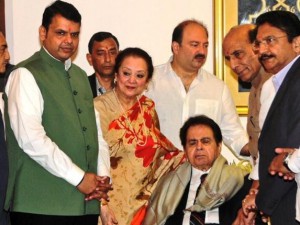 MUMBAI: Legendary actor Dilip Kumar was on Sunday presented with the Padma Vibhushan by Union Home Minister Rajnath Singh at the thespian’s residence in suburban Bandra.
The 93-year-old legend was presented a medal, a certificate and a shawl by Mr. Singh, in the presence of the actor’s wife Saira Bano.Maharashtra Governor C. Vidyasagar Rao, Chief Minister Devendra Fadnavis, were among other dignitaries present at the actor’s home when he received the award.
The announcement to honour Bollywood veterans Kumar, Amitabh Bachchan and a few others with the prestigious Padma Vibhushan award was made by the government on the eve of Republic Day on January 25, 2015.
However, Dilip Kumar, due to ill-health, could not attend the special function held at the Rashtrapati Bhavan in April when other Padma awardees were honoured by President Pranab Mukherjee.
Born as Muhammad Yousuf Khan in Peshawar, Kumar made his debut as an actor in the film “Jwar Bhata” in 1944 produced by Bombay Talkies.
In a career spanned over six decades, he starred in films of a variety of genres such as the romantic “Andaz” (1949), the swashbuckling Aan (1952), the dramatic “Devdas” (1955), the comical “Azaad” (1955), the historical “Mughal-e-Azam” (1960) and the social “Ganga Jamuna” (1961).
Called as the ‘tragedy king of Bollywood’, he also did films like “Kranti” (1981), “Shakti” (1982), “Karma” (1986) and “Saudagar” (1991) and others. His last film was “Qila” (1998).
The Government of India honoured him with the Padma Bhushan award in 1991, the Dadasaheb Phalke Award in 1994 and the Padma Vibhushan earlier this year, for his exceptional and distinguished contribution to the Indian cinema.
The legend

Born – Muhammad Yusuf Khan, known as Dilip Kumar, was born in December 11, 1922. He started his film career in 1944 with Jwar Bhata.
Versatile actor – He is known for movies like Aan , Daag , Devdas , Madhumati , Paigham , Mughal-e-Azam , Ganga Jamuna , and Ram Aur Shyam among many. Even today viewers remember his “ro Nina ro” (cry Nina cry) in Andaz, as he shows Nargis the photo of her late father and helps her get over the shock of his death.
“Ultimate method actor” – Satyajit Ray had described him as “ultimate method actor”, which the legendary actor considers a great compliment coming from India’s most acclaimed director. “We shared a warm rapport and I feel bad I could not work under his direction. Had I, perhaps my greatest performance would have been extracted by him. My tragic performances required method acting as there was a matter of meter and chord for each shade in my performance,” the actor said.
Dilip Kumar had learnt to play sitar for one-and-a-half years before the Madhuban mein Radhika nache re sequence in Kohinoor to make it look real and spontaneous.
Co-actors – He has worked with many actors including Nargis, Suchitra Sen, Meena Kumari, Madhubala and Vyjayantimala. He has mostly worked with Vyjayantimala; they starred in seven movies together.
Awards – He is the recipient of Dadasaheb Phalke Award, Padma Vibhushan, Padma Bhushan for his outstanding contribution towards Indian cinema. Besides that, he still holds the record of the most numbers of Filmfare Best Actor Award with eight wins.