RAEBRELI: Priyanka Gandhi Vadra today took a swipe at Narendra Modi over “Snoopgate”, or the alleged spying on a woman on the orders of the Gujarat government in 2009, and appealed to people to “throw out politicians who tap women’s phones”. 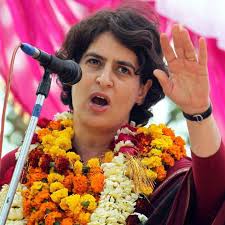 Priyanka, who hit out at corruption allegations against her husband Robert Vadra yesterday, today targeted Mr Modi repeatedly while campaigning in Uttar Pradesh for her mother Sonia Gandhi, the president of the Congress party. “Some leaders are tapping phone calls behind closed doors. Is this how they empower women? Such politicians should be thrown out,” Priyanka scoffed, at a village in Raebareli from where her mother is fighting for re-election.
Without naming Mr Modi, the 42-year-old mocked the references to women’s empowerment in his campaign speeches.
“Leaders call you all mothers, sisters, daughters. But is that our identity? No, women have their own identity,” she said. “You all are responsible for bringing a leader who will be accountable.”
The war of words between Priyanka, the sister of Congress vice president Rahul Gandhi, and the BJP intensified after she said yesterday that her family is “being humiliated” by repeated attacks on her husband. Mr Vadra, a businessman, has been accused of making a fortune in questionable real estate deals with help from Congress regimes in Haryana and Rajasthan. Mr Modi has referred sarcastically in rallies to  what he describes as Mr Vadra’s unique ability to accumulate vast wealth in a short period. The Gandhis have, in turn, targeted him over Snoopgate. Senior BJP leader Arun Jaitley today said says he is “in complete agreement” with Priyanka that personal issues must not be raised by political parties and has asked her Congress party to stop targeting Mr Modi.