VARANASI: AAP leader Arvind Kejriwal on Wednesday filed his nomination for the Lok Sabha election from here to take on BJP’s prime ministerial candidate Narendra Modi after a roadshow that drew thousands in the Hindu holy city.
Addressing the mass who marched along with his slow-moving open van and who packed the streets, Kejriwal launched a blistering attack on Modi and Congress leader Rahul Gandhi while describing himself as an “aam aadmi”. It was the biggest show of strength by the Aam Aadmi Party since the former Delhi chief minister shifted to Varanasi to fight the high-profile battle with Modi. Ajay Rai of Congress is the third major candidate. 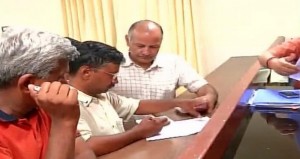 It took Kejriwal, 45, about three hours to cover just a three-kilometre distance to the district magistrate’s office where he filed the papers in the company of senior party colleagues including Manish Sisodia. All along the route, the AAP leader repeatedly halted to address crowds, underlining that Modi, if he won the election here, would become as scarce as Rahul Gandhi in Amethi.
He also asked aloud from where Modi and Gandhi were getting the money being poured into their election campaign across the country. ”Look at all these hoardings… Where do they get their money?” he asked looking at one giant Modi hoarding in Varanasi. “And here I have only 500 rupees with me!”
Kejriwal said while he was undertaking a simple election campaign, Modi would fly into Varanasi Thursday by helicopter to file his nomination. ”The people of Kashi (Varanasi) should also not get fooled like people in Amethi have been fooled for years,” he thundered as his vehicle crawled through parts of the congested city. Rahul Gandhi is seeking re-election from Amethi constituency.He said Modi had spent some Rs.5,000 crore and Rahul Gandhi Rs.1,000 crore on advertisements — on themselves and their parties. He said Varanasi should elect an MP with whom they can relate.
“This time people have to end the politics of corporates and establish a government of the people. We are on the path of truth, that is why god is with us,” he said. Thousands of people, including AAP activists with their trademark white caps, walked with Kejriwal shouting slogans and holding AAP flags. It led to massive traffic jams.
The crowds kept swelling as the over-half-a-mile-long roadshow wound its way. Many shopkeepers shut their shops and joined him.  Hundreds also stood on the road dividers or leaned out of the windows or watched Kejriwal from their terraces on both sides of the roads.
In impromptu speeches, Kejriwal flayed the BJP-controlled local Varanasi administration for keeping the Ganges dirty. When he passed a mosque, many trooped out to cheer him. He waved to them. In the sweltering heat, some people offered Kejriwal water and cold drinks. But he declined them politely.Barring two places where 10-15 people shouted “pro-Modi” slogans, it was an AAP show.  One man who did not give his name told reporter: “My heart bleeds for this man. He is a good man. But he can’t win against Modi.”
Another resident, Salim Siddiqui, was vocally pro-Kejriwal. ”I don’t think Kejriwal can be called an ‘outsider’. Even Modi is. Even Murli Manohar Joshi (who won the 2009 election here) was.  ”And why should we pull up Kejriwal for resigning as the Delhi chief minister? He quit on principles. If you ask me, even Modi should have quit after the Gujarat riots (in 2002).”
The Varanasi battle became the most watched electoral contest after Kejriwal announced his candidature against Modi, saying there was a need to defeat both Modi and Rahul Gandhi in Amethi.  With 1.6 million voters, Varanasi goes to the polls 12 May — on the last day of the staggered balloting that began 7 April.The nationwide results will be known 16 May.