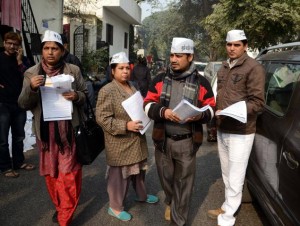 With Aam Admi Party expected to announce its decision on government formation only on Monday, there was no clarity whether the Union Cabinet meeting tomorrow will take a call on imposition of President’s rule in Delhi.

A note to be discussed by the Union Cabinet on imposition of central rule is being prepared by Home Ministry officials but will be moved only after getting a political clearance from the highest level of the government, officials said.“It is a political decision. When we are told, the note will be placed before the cabinet. It is unlikely on Thursday,” an official said.m
The government seems to be ready to wait till Monday when AAP, with 28 MLAs in its kitty, makes public its decision whether to form the government after eliciting views from the people.

AAP had sought time from Delhi Lieutenant Governor Najeeb Jung to take a decision whether to form government after Congress, with eight MLAs, offered outside support to the Arvind Kejriwal-led party.
The party had set 18 conditions for Congress and BJP before it can decide on taking their support to form a government. Congress had then put the ball in AAP’s court, saying 16 of its 18 demands needed just administrative decisions and had nothing to do with parliament or assembly.

However, AAP had yesterday announced that it would distribute 25 lakh copies of letters seeking people’s views on the issue of government formation and then replies will be accepted till Sunday.In a House of 70, BJP(31) and its ally Akali Dal(1) together have 32 seats, four short of majority while AAP has 28 seats.The Lt Governor has already recommended that Delhi be put under President’s rule with the new assembly in suspended animation among other options.

Imposition of central rule was one of the options listed by Jung in his report submitted to the President after his consultations with BJP, the single largest party, followed by AAP.Meanwhile, officials said Chief Minister Shiela Dikshit will continue in the top post till an alternative arrangement is made.