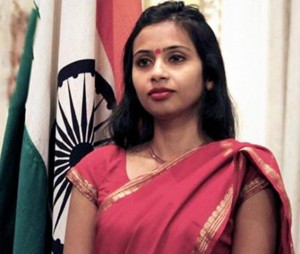 New Delhi : Devyani Khobragade, who was arrested in New York for alleged visa fraud and underpaying her domestic assistant and had to reportedly undergo humiliating frisking by U.S. marshals last week, has been shifted to the Permanent Mission of India (PMI) in New York, it is reliably learnt in New Delhi on Wednesday.

She is now entitled to all diplomatic privileges and immunity under the Vienna Convention on Diplomatic Relations which she did not enjoy as a consular officer.

Consular officers are covered under the Vienna Convention on Consular Relations, which does not give them the same protection as full diplomats.

Khobragade will be brought back with dignity: Khurshid

Indian diplomat Devyani Khobragade will be brought back to India and her dignity will be restored, External Affairs Minister Salman Khurshid assured the Rajya Sabha Wednesday as members expressed outrage over her arrest and humiliation in the US.

“We will bring back the woman diplomat arrested in New York and restore her dignity. It is my responsibility,” Mr. Khurshid said in the Rajya Sabha after a brief discussion on the issue.

“We strongly condemn the treatment meted out to Indian diplomat in New York. India is not over-reacting to treatment to its diplomat by US. The nation must speak in one voice,” he said.

The issue was raised by Leader of Opposition Arun Jaitley who called for a review of India’s foreign policy. Commerce Minister Anand Sharma described it as a “national outrage” and said the government has taken a stern view of it.

Mr. Jaitley said it was time India insisted on being treated like equals. “If we conduct foreign policy in a manner that we’re taken for granted, then these incidents will be repeated.”

“We need to introspect where we stand on foreign policy,” he said, adding that the retaliatory measures India has taken needed to be continued.

Bahujan Samaj Party chief Mayawati said the government should take up the case seriously as the diplomat was a Dalit. She accused New Delhi of waking up late.

Communist Party of India (Marxist)’s Sitaram Yechury said: “There have been cabinet members in the NDA and UPA governments who have been subjected to such (treatment).”

“This cannot be accepted by any sovereign nation… The attitude needs to change.”

Trinamool Congress member Derek O’Brien targetted the US: “We live in a global village but we don’t need a self-appointed global village headman. It is time now to codify all privileges India provides to US diplomats and the privileges our diplomats receive in the US.”

DMK’s Kanimozhi complained that time and again Indian leaders have been mistreated in the U.S.

On his part, Samajwadi Party leader Ramgopal Yadav said India seemed to suffer from an inferiority complex, which, he felt, “is very sad”.

The demand for discussing the issue was raised as soon as the upper house met. Chairman M. Hamid Ansari adjourned the house for 15 minutes and consulted all party leaders before the debate was taken up.