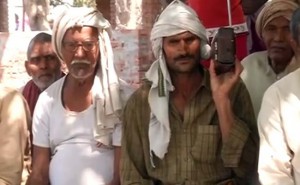 NEW DELHI: Reaching out to farmers through his monthly radio programme ‘Mann ki Baat’, Prime Minister Narendra Modi today said the opposition was misleading them on the Land Acquisition Bill by spreading rumours and false propaganda.
“I am perplexed to learn about so many rumours spread against the bill (land acquisition),” PM Modi said in his 30-minute speech, which aired on All India Radio.
The PM said his government’s land bill is not anti-farmer, but is, in fact, an improvement on the UPA’s land law.
“”We amended the earlier bill… Tell me is this amendment in the bill anti-farmer? That’s why we had to bring the ordinance. If we had not brought this ordinance then farmers land would have gone and they. that is, farmers wouldn’t have got any money,” the PM said.
The land bill, which seeks to amend the Land Acquisition Act of 2013, has come under severe criticism from various parties, which contend that it will hurt farmers’ interests. The government, on the other hand, insists that the interests of farmers have been taken care of in the new bill, which seeks to speed up developmental works.
The bill sailed through the Lok Sabha, where the government has a big majority, but is yet to be presented in the Rajya Sabha in the face of the Congress-led Opposition’s firm rejection of it as “anti-farmer”.
While passing the bill in the Lok Sabha, the government introduced nine amendments to placate critics and get opposition parties on board, but it has failed to do so. On Tuesday, 14 parties marched to the Rashtrapati Bhavan, led by Congress president Sonia Gandhi, in protest against the land bill.
Faced with such opposition, the government has not introduced the bill in the Rajya Sabha, where it is in a minority, as it fears that the united Opposition will send the bill to a Parliamentary committee for scrutiny, thus blocking its immediate passage.
The Parliament closed on Friday for a month-long recess in the Budget Session. The ordinance or emergency executive order that the bill seeks to ratify, lapses on April 5, during the recess.