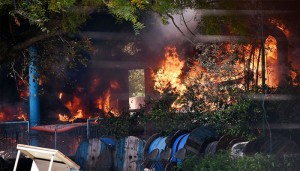 The fire began at around 2:21 pm at an air conditioning power plant, which is located on the periphery of the complex. Fire officials say the blaze could have been triggered by welding work during maintenance checks of the ACs. Delhi Fire Service Chief AK Sharma said prima facie it appeared to be a case of negligence as prescribed safety norms were not followed during maintenance work.

Thick black smoke could be seen billowing above the red sandstone boundary wall of the Parliament complex as police tried to clear the streets around the building. There were just a handful of officials present inside Parliament at the time.
At least 10 fire engines and 30 fire services personnel were pressed into service to contain the fire from spreading.”The first responder was a fire engine which is always stationed inside Parliament. After that, 10 more fire tenders were brought in. Fire was under control in 19 minutes,” AK Sharma, Director, Delhi Fire Service told Reporters.
Expressing serious concern, President Pranab Mukherjee today “called upon authorities to conduct an urgent enquiry into the cause of the fire and take necessary steps to ensure that such incidents do not occur in the future.”
“We have initiated an enquiry into the matter. We will look into all aspects including the cause and circumstances of the fire and take action against those found responsible,” Joint Commissioner of Police (New Delhi) MK Meena told Media.On March 19, a minor fire had broken out in the AC wiring at Gate 5 of the Parliament complex