KOLKATA/ NEW DELHI: As India is keenly watching BJP’s finally taking over in Delhi, a rare Left-Congress organizational similarity may leave us all surprised!
While Left Front big brother CPI(M) quoted an archaic Leninist slogan of  `collective responsibility’ to help present leadership not to wind up and leave pace for a new team to take over, the Congress hurriedly used Gandhian loud-thinking once under pressure `I will quit’ (without trying to see reason) but finally staying put as Leader of the party as loyalists intrigued. 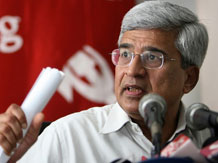 Though it would be somewhat historically foolish to recall colossus like Lenin or Gandhi or Bose in present Indian context of Left and Congress getting washed out in just concluded election, as neither CPI(M) has any leader worth Lenin’s men nor present Congress belonged to the intellectual level of MK Gandhi or Subhas Chandra Bose and Gandhi’s defeat to Bose in presidential election in 1939 inspired him to come out with: “I will quit with my men.’’
“Then Congress wasn’t the property of any one, it was a national organization which belonged to all countrymen. So you cannot compare the present Congress with the colossuses who glared like Sun. I was surprised however both present Congress and CPI(M) didn’t act democratically to leave pace for new leadership to takeover, instead sought refuge to strategist like Lenin and Gandhi,’’ agreed  a Delhi University’s Political Science professor.
Nowhere  either during party’s Politbureau meeting CPI(M) leaders in Delhi or in Kolkata, much like Congress leadership during their last meeting in Delhi, analysed the reasons of their failure to address simple day-today problems of common people, felt an old Congress leader who now live without party connections in Bengal.
“Thus a desire to fudge owning up responsibilities for debacle creates a strange parallel political line between Congress, a right party and CPI(M), a left party, supposed to be inspired by Bolshevik philosophy way back in 1925, denotes  a total political decay,’’ said a History Professor of Calcutta University.
“Didn’t Congress know inflation, rich getting richer every day, neo-poor both in urban and rural India and corruption taught the party a lesion?’’ Quipped the old Congress leader.
“CPI(M) leaders in upper scale enjoyed like the upwardly mobile (a new creation of reform) middle-class a consumerist life-style with a mix of Stalinist ruthlessness, couldn’t voice their protest against the way Congress-led UPA I & II created a disconnect with real India,’’ a veteran CPI(M) leader told the Newstrack.