NEW DELHI : Narendra Modi, prime-minister-to-be, and BJP president Rajnath Singh are holding separate consultations in different parts of Delhi to finalise the new BJP-led cabinet. Senior BJP leader Sushma Swaraj met Mr Singh at his residence and has now reached Gujarat Bhawan where Mr Modi is. Here is some  developments
Mr Modi’s chief aide Amit Shah is with him at Gujarat Bhawan, where he has been camped since yesterday holding multiple meetings. Another member of his core group of decision makers, Arun Jaitley, was with them in the morning before heading to Rajnath Singh’s residence at 38, Ashoka Road, where he stayed for a while. A stream of BJP hopefuls have met both Mr Modi and the party president this morning. Leaders like Varun Gandhi, Uma Bharti, Najma Heptullah, C P Thakur, Anurag Thakur, Gopinath Munde and Vijay Goel visited Mr Singh.
Ms Swaraj waited for a while as former Uttar Pradesh chief minister Kalyan Singh finished his meeting with Rajnath Singh. He soon drove up at Gujarat Bhawan to meet Mr Modi.Satyapal Singh, the former Mumbai police commissioner who quit his post to contest the Lok Sabha polls as a BJP candidate in Uttar Pradesh, also visited Mr Singh. He has pulled off an impressive win in Baghpat defeating Rahstriya Lok Dal chief and union minister Ajit Singh.
As they finalise a cabinet list, Mr Modi and his team have to decide what roles to give leaders like LK  Advani, Sushma Swaraj and MM Joshi – who comprise the BJP faction which is reportedly not close to the PM-to-be. Yesterday, Mr Modi had stepped out to meet Mr Advani and the meeting had lasted for 40 minutes. Mr Advani is reportedly keen to be the Lok Sabha Speaker as that position does not report to the PM.  Ms Swaraj is reportedly keen on taking charge of one of the top four ministries that form the Cabinet Committee on Security – home, defence, external affairs and finance. 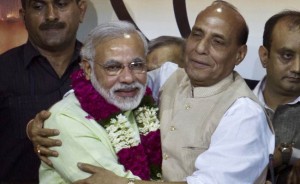 Allies are meeting the BJP brass too. Lok Janshakti Party chief Ramvilas Paswan and his son Chirag,  MDMK chief Vaiko and Apna Dal leader Anupriya Patel met Mr Singh today while Naga People’s Front leader and Nagaland Chief Minister Neiphiu Rio met Mr Modi yesterday.YSR Congress chief Jagan Mohan Reddy also met Mr Modi, purportedly to discuss issues and concerns related to the bifurcation of Andhra Pradesh. Sources say leaders of YSR Congress also wanted the PM-elect to reassure them that his ally, Chandrababu Naidu, who will take over as the chief minister of Andhra Pradesh, will not persecute their leader on what they describe as false charges of corruption. The date of the new government’s swearing-in has still not been finalised. The newly-elected MPs of the BJP will hold a meeting at 12 noon tomorrow to formally elect Mr Modi as their leader, and as such, the prime ministerial designate of the BJP-led NDA.Rashtriya Swayamsevak Sangh (RSS) spokesperson Ram Madhav and BJP leader Udit Raj were earlier seen leaving the Jhandewalan office of the Sangh. The RSS office had been a hub of much political activity yesterday, when leaders like Venkaiah Naidu, Sushma Swaraj, Kalraj Mishra and Mr Munde paid a visit to the party’s ideological mentor and met the Sangh’s second-in-command Bhaiyyaji Joshi.