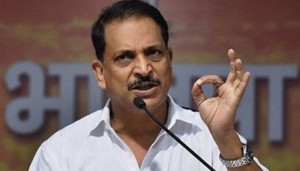 MUMBAI: As Shiv Sena continues to make conciliatory noises, Bharatiya Janata Party (BJP) leader Rajiv Pratap Rudy on Thursday said that no Sena leader will be inducted in the new Maharashtra government on Friday.However, keeping options open for re-union with Shiv Sena, the BJP leader maintained that talks with its erstwhile ally are on for a possible tie-up in Maharashtra. Meanwhile, some reports claimed that BJP would keep some ministries open for its estranged ally if it decides to join the BJP-led ministry.
Rudy’s statement comes amidst reports that Shiv Sena wants its leaders to be sworn-in along with BJP leaders on Friday.Interestingly, there has been no official confirmation from Uddhav Thackeary-led Shiv Sena as to whether his party will forge an alliance with its erstwhile partner.However, Sena in its mouthpiece ‘Saamna’ today praised Prime Minister Narendra Modi and chief minister-designate Devendra Fadnavis, saying the state can expect ‘acchhe din’ (good days) under them, but cautioned its former ally against accepting NCP’s support.
The swearing-in ceremony of the BJP’s first government in Maharashtra will be held at the Wankhede Stadium tomorrow evening.Both Sena and BJP broke their decades-long alliance after failing to reach an agreement on the seat-sharing formula for the recently held Maharashtra Assembly polls.
During the election campaign Sena had viciously campaigned against BJP’s most powerful leader, Prime Minister Narendra Modi. Interestingly, Modi who extensively campaigned in the Maratha land didn’t utter a single word against the Shiv Sena because of his respects for late Balasaheb Thackeray.Maharashtra Governor CV Rao will administer the oath of office and secrecy to Fadnavis, 44, and a small initial team of cabinet ministers Friday evening.
The BJP emerged as the single largest party with 122 legislators in the 288-member Assembly – far short of the requisite 145 for a simple majority.One legislator died early Monday, reducing the party’s strength to 121. Besides, it has the support of one pre-poll ally Rashtriya Samaj Paksha. The Shiv Sena, with 63 MLAs, has offered support, while Nationalist Congress Party will abstain from the vote of confidence, ensuring a smooth sailing for the new government.