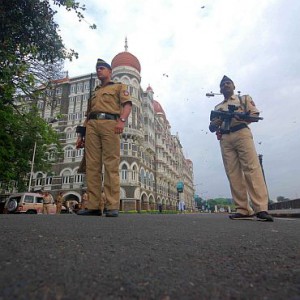 MUMBAI: A thick security blanket has been thrown in and around Wankhede Stadium, where the first BJP government in Maharashtra led by Devendra Fadnavis will be sworn-in on Friday in a mega ceremony likely to be attended by Prime Minister Narendra Modi and several VVIPs.
More than 2,500 security personnel are being deployed in and around the iconic and sprawling cricket ground in South Mumbai. Over 1,100 traffic policemen will ensure smooth movement of VIP and VVIP vehicles around the stadium and along the roads leading to the venue from domestic airport.
The stadium, hosting the first open air oath-taking ceremony, has been declared a no flying zone, police said.Under the supervision of Police Commissioner Rakesh Maria, about 2,500 security personnel, including members from Mumbai Police, Special Protection Group (SPG) and Quick Response Teams, will maintain a strict vigil during the high-profile event, said Joint Commissioner of Police (Law and Order) Dhananjay Kamalakar.The area has been sanitised, said another officer.
Kamalakar said as many as 30,000 people, including nearly 5,000 VVIPs and VIPs, have been invited. “There are about 2,500 CCTVs inside the ground while videography will be done at the five entrance gates,” he said.The IPS officer declined to divulge the names of VVIP or VIP guests coming for the event slated to start at about 4 pm.
But police sources said besides Modi, BJP president Amit Shah, veteran party leader L K Advani, RSS chief Mohan Bhagwat, several Union Ministers, Chief Ministers of BJP-ruled states, party MLAs, Bollywood celebrities and industrialists are likely to attend CM-designate Fadnavis’ inauguration.Kamalakar said, “the Bomb Detection and Disposal Squad (BDDS) along with the dog squad, has been carrying out regular checks in the stadium.
Joint Commissioner of Police (Traffic) B K Upadhyay said no vehicle parking will be allowed in areas surrounding the stadium between 2 pm and 7 pm.Police are conducting anti-sabotage checks.”Snipers will be positioned at strategic locations tomorrow morning,” said another police officer.