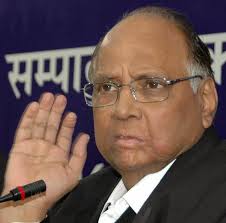 KOLHAPUR : Union Agriculture Minister and Nationalist Congress Party chief Sharad Pawar on Sunday reiterated the stand taken by his party colleague Praful Patel that there was no need for a debate after the court ruling on Gujarat Chief Minister Narendra Modi’s role during the 2002 riots.
“If courts have given their verdict, then the question of holding a debate on it does not arise. We accept the court’s order and there won’t be any debate on it,” Mr Pawar told reporters.
Last week, Mr Patel, also a senior minister at the Centre, had said, “There’s no point to comment because it is for each one to give his or her version but the fact remains that perception today is important and if the judicial system has given a certain finality to any controversy, I think we should let it rest there.”
Some news reports had said last week that Mr Pawar had met Mr Modi, BJP’s prime ministerial candidate, last month in New Delhi. However, the NCP chief later refuted the report. But Mr Patel made it clear that the NCP’s partnership with the Congress should not be taken for granted.
“The Congress has delayed seat-alliance talks with NCP in Maharashtra for far too long. We’re awaiting clarity from them.” said Mr Patel.  Congress sources believe the NCP is posturing ahead of bi-party negotiations for how they will divide Maharashtra’s 48 parliamentary seats between them.