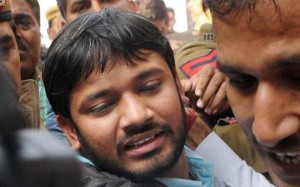 NEW DELHI:  JNU students Kanhaiya Kumar and Umar Khalid, charged with sedition and being investigated by the police, have been cleared in a Delhi Government inquiry.
There is no evidence that Kanhaiya Kumar raised anti-national slogans at an event on February 9 to mark the anniversary of the hanging of Parliament attack convict Afzal Guru, the Delhi government report says. No witness had been found to such utterances by the student either, said the report.
In video footage, Umar Khalid is heard urging “Kashmiris keep fighting, we are with you”. The report said his views on Kashmir and Afzal are well-knownTwo more students, Anirban Bhattacharya and Ashutosh, “possibly” raised slogans in support of Afzal Guru, the police said quoting security staff of JNU or Jawaharlal Nehru University.
The Delhi government inquiry also calls for an investigation into “outsiders of Kashmir descent” seen in the video, their faces covered, shouting anti-India slogans.The Delhi government inquiry also said that the police complaint referred to slogans raised “under the leadership of Umar Khalid”. It notes that the slogan “Pakistan Zindabad” is not heard in any video.
Kanhaiya Kumar, Umar Khalid and another student Anirban Bhattacharya were arrested for their alleged role in the event.Mr Kumar, 28, was granted bail yesterday but was asked by the High Court to guarantee that he will not participate in any “anti-national activity” and was also warned against “misinterpreting freedom of speech”, which was likened to an “infection” that could cause gangrene.
A forensic investigation ordered by the Delhi government into seven videos that have emerged since the Afzal Guru event, showed that two of the videos were doctored and controversial words were inserted in them.
Delhi’s ruling Aam Aadmi Party (AAP) has hit out at the Delhi Police and the Centre on the arrest of the students, with Chief Minister Arvind Kejriwal alleging: “This government seems to be at war with the students of this country.”