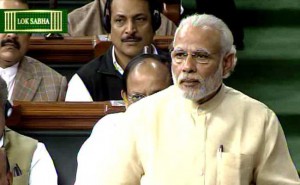 “Parliament is a forum where different viewpoints are put forward, where questions are being asked to the government, where government is made accountable and nobody is spared, and one shouldn’t expect otherwise,” PM Modi said, and also, “in doing so, it would be great if we uphold parliamentary traditions” to let the Lok Sabha and Rajya Sabha function “peacefully and responsibly”.

“It is not me saying this… These are the words of former prime minister Rajiv Gandhi,” PM Modi told the Lok Sabha, a full house today. Congress president Sonia Gandhi and her son and deputy Rahul Gandhi were present during the PM’s speech

And in another attack on the Congress he quoted Indira Gandhi, Pandit Nehru’s daughter, as having said, “Why do we want to portray the image of India as if we have a begging bowl in our hands. When we ourselves will say this, others will say the same thing louder and stronger.”
PM Modi’s speech today was a strong rebuttal of an attack on him yesterday by Rahul Gandhi, the son of Rajiv Gandhi and the grandson of Indira Gandhi.He alleged that the main opposition party disrupts Parliament because of an “an inferiority complex that other good and able lawmakers from the Opposition should not be allowed to speak or show their prowess. No one should be seen as strong or able (as the Congress)in the Opposition.”

In his appeal that the houses be allowed to run, PM Modi also referred to Left leader Somnath Chatterjee who was Lok Sabha speaker during the first UPA government from 2004 to 2009.”The House is a place where debates are to take place. When parliament sessions are not functional, the nation suffers and more than that the MPs suffer because they can’t discuss issues,” said PM Modi.