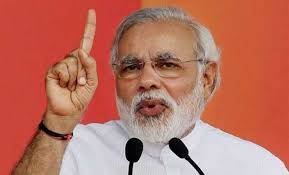 NEW DELHI: Prime Minister Narendra Modi has said, no allegation of corruption could be levelled against the NDA government in its 22 months rule.
Addressing the concluding session of two day BJP national executive in New Delhi on Sunday, Mr Modi reminded the party workers that nationalism is party’s ideology and strength.
Appreciating the party’s work for its expansion across the country, the Prime Minister, stressed the need for involvement of new members in nation buildings.
Mr Modi reiterated his commitment for the agenda of development saying opposition is trying to divert attention by discrediting the good work of the NDA government.He asked BJP workers not to get involved in any controversy, and rather talk about government’s initiatives.
The Prime Minister said, the workers need to be positive and they should go to the people to publicize the efforts of the government for the betterment of the country.
Talking to reporters, senior party leader and Union Minister Rajnath Singh said, the Prime Minister urged the BJP workers to become creative and use social media to promote the central schemes.

Mr Singh also informed that the BJP has decided to celebrate Gram Uday Se Bharat Uday week between 14th to 24th of April.He said, Prime Minister will visit the birthplace of B R Ambedkar in Madhya Pradesh on 14th of next month to pay homage to architect of Indian Constitution.