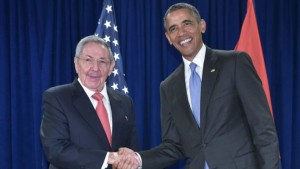 President Obama’s visit to Cuba is being seen as a significant step towards the full normalisation of relations between the US and Cuba after decades of hostility.

However, beyond the fanfare of the visit and after months of high-level meetings, there are still several important issues holding the countries back from re-establishing full ties.
He has became the first US president in 88 years to visit Cuba.
The trip is aimed at ending decades of Cold War animosity. Mr Obama will meet President Raul Castro on Monday and they will discuss trade and political reforms.
Just after landing at Havana last night, Obama tweeted that he is looking forward to meeting and hearing directly from the Cuban people.
Moments later, a smiling Obama emerged from Air Force One with his wife First Lady Michelle and their two daughters, clutching umbrellas to shield themselves from a warm afternoon rain shower. He was greeted by Cuban Foreign Minister Bruno Rodriguez.

Two hours after landing, Mr Obama greeted staff from the reopened US embassy, calling his trip a historic visit and a historic opportunity.Obama is not only the first sitting US president to visit Cuba since Fidel Castro’s guerrillas overthrew the US-backed government of Fulgencio Batista in 1959, but the first since President Calvin Coolidge in 1928.
For Cubans dreaming of escaping isolation and reinvigorating their threadbare economy, the visit has created huge excitement.Meanwhile, Havana Police has arrested dozens of people from a banned group demanding greater human rights.

Republicans and some human rights activists have criticised Obama for dealing with Castro, given the lack of political, media and economic freedom in a country where the Communist Party retains tight control.

The U.S. lands a manned mission to the moon
On July 20, 1969, only eight years after the US and Cuba cut ties, the US successfully landed Apollo 11 on the moon carrying Neil Armstrong, Michael Collins and Buzz Aldrin. This was the first manned moon landing. According to NASA, 530 million people watching Armstrong take his first few steps.
The Berlin Wall falls
On November 9, 1989, an announcement was made declaring that citizens of the German Democratic Republic, or East Germany, could cross the border at any time. That night, people cross the border freely and bit-by-bit take home pieces of the wall.
The World Wide Web
In 1989 Tim Berners-Lee, a computer scientist from the UK, started to work on a way share information over the Internet. The next year Berners-Lee came out with the World Wide Web that included three fundamental technologies: the HTML language, the URL identifier, and HTTP retrieval. A few years later it was announced that the World Wide Web would be free to use for anyone with a computer.
Dissolution of the Soviet Union
Cuba and the Soviet Union worked together quite a bit in the early years of the US cutting off diplomatic relations. In 1991, The Soviet Union was officially dissolved on December 25 after 11 Soviet republics met and agreed that they would all be independent states. This stemmed from then Soviet Union leader Mikhail Gorbachev giving back liberties that had been taken during Stalin’s time and restructuring the economy.
Planet definitions kick out Pluto
In 2006, 45 years after cutting diplomatic ties, it was announced that Pluto did not fit the definition of a planet and was no longer considered a planet; instead it was considered a dwarf planet. According to NASA, after finding Eris, a dwarf planet past Pluto, astronomers decided that Pluto was not an actual planet because of its size and location in space.