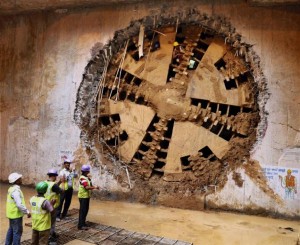 NEW DELHI: Hazrat Nizamuddin Metro station, with a projected ridership of 53,370, will connect people not only to the nearby Nizamuddin railway station but also to the Anand Vihar ISBT. On Monday, Delhi Metro Rail Corporation began tunnelling work for the station, which is expected to be commissioned by 2016. The 5.5km-long tunnel will come up between Hazrat Nizamuddin and Lajpat Nagar, and is a part of the Mukundpur (Majlis Park)-Shiv Vihar corridor.

Incidentally, DMRC will construct 53km of underground Delhi Metro lines as part of phase III for which 34 tunnel boring machines (TBMs) are expected to be used. A total of 74 tunnels will be constructed.

The tunnelling work, the beginning of which was overseen by Delhi Metro head Mangu Singh, is expected to reach Ashram by the first week of July 2014. “The 3.366km underground stretch between Lajpat Nagar and Hazrat Nizamuddin will require six TBM drives, including two drives each from Hazrat Nizamuddin to Ashram, Ashram to Vinobapuri and Vinobapuri to Lajpat Nagar,” added the spokesman.

The TBM, said DMRC, has been assembled at the site and the initial launching drive started from Monday.

“DMRC will place 4,808 precast reinforced concrete cement rings of 1.4m width in this tunneling drive between Hazrat Nizamuddin and Lajpat Nagar. The tunnel will have an internal diameter of 5.8m,” said Singh.

This is the third TBM that has been lowered on the 58.467km long corridor. The other two TBMs are currently operational between the Netaji Subhash Place-Shalimar Bagh and INA-Lajpat Nagar stretches.